Janet Yellen is in a tough spot.

Commentators are right to be cautious. There is plenty of evidence supporting being very cautious about raising rates.

Both Australia and New Zealand lifted interest rates from their GFC lows swiftly. Australia did so in 2009, NZ twice in 2011 and 2014. Both countries dropped rates again soon afterwards, as these graphs show, .

Being hasty in raising rates is unwise.  So Yellen’s cautious stance is probably appropriate.

But her position is especially difficult because her options are so limited. US rate changes, by convention, happen in lumps of 0.25 percentage points. Just like Australia’s and New Zealand’s.

She faces, by convention, a binary choice. Leave rates steady, or execute a 0.25 point hike that could frighten markets.

The size of a standard rate move now raises questions.

A key one that nobody seems to be contemplating: Should rate rises be the same size as rate cuts? The obvious answer is no.

Economies tank hard.  Recoveries are slower and more tentative. Unemployment rises steeply, but it falls slowly, as this next graph shows.

There is an implicit understanding that rate cuts can be bigger than hikes. The Australian government bundles groups of 0.25 together when things go bad particularly quickly. For example the RBA made a cut of 0.50 in 2012, and three cuts of 1.0 in late 2008 and early 2009.

But there is no explicit understanding that rate cuts could be smaller than 0.25 when they are rising.

Why? There is no apparent technical impediment to this.

Australia is now perfectly capable at holding rates at levels more tightly defined than 0.25 per cent intervals, as this graph of the target (red) and actual (black) rate shows: 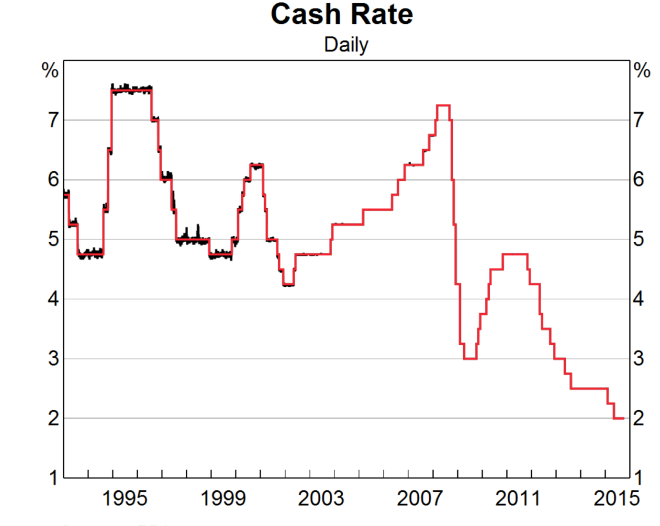 Whether Yellen should raise rates is a divisive issue. She can counter that political division with a bit of  arithmetic division.

Splitting her first hike into several small pieces is the answer.  Rises of 0.1 per cent – or even smaller – could be just the trick at difficult times like this.

4 thoughts on “Should the wingpsan of a hawk equal the wingspan of a dove?”