Like most people who care about economics, read about it or talk about it, from time to time people say this to me:
“I couldn’t get interested in economics. I just don’t care enough about money.”
They say it dismissively. As though economics was about money.
Economics is about people.
Take the latest work by one of my favourite economists, Professor Jeff Borland. He produces a “labour market snapshot” each month that he emails to interested parties. The April one was focused on the plight of the young.
“Employment prospect of the young in Australia have weakened considerably since the GFC,” he writes. 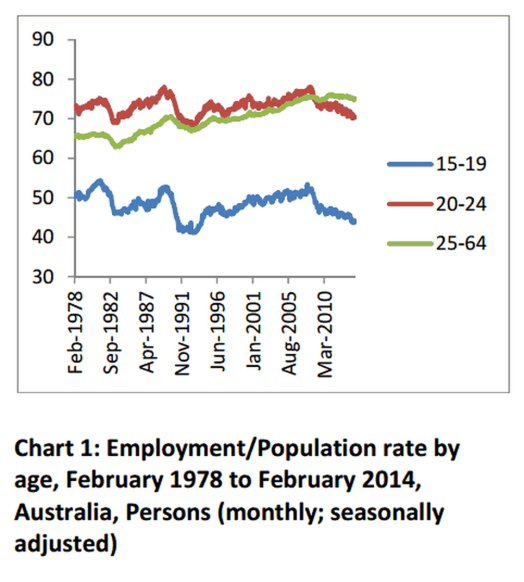 The biggest fall in employment is among those who are not in full-time study. 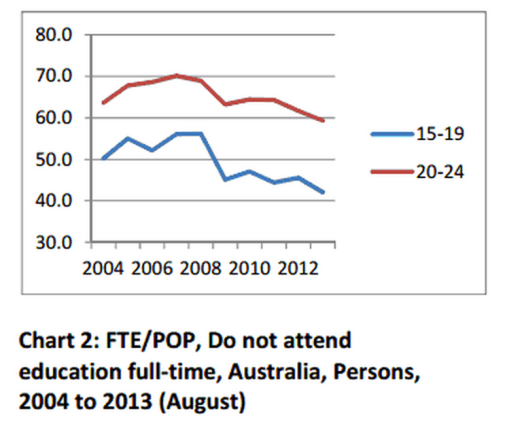 This is not an academic issue. It’s a goddamn human tragedy. Unemployment at this tender age correlates with worse outcomes on just about every measure.
“Unemployment while young can lead to long-term reductions in wages, increased chances of subsequent periods of unemployment and poorer health outcomes,” according to UK economists.
Brotherhood of Saint Laurence executive director Tony Nicholson: “And in our modern economy that means that they’re really being sentenced to a lifetime of poverty.”
“One in three (32 per cent) long-term unemployed youngsters have contemplated suicide and one in four (24 per cent) in this group admitted to self-harming,” according to a UK survey reported in early 2014.
This blog from the Peterson Institute for International Economics: “Considerable research suggests that less stable employment experiences of young people can lead to “scarring” that affects their future employment and earning prospects.”
The critics of economics implicitly accuse it of reification – that by creating ways of quantifying and measuring the material world they bring materialism to the centre.
There could be a germ of truth there. But to not study the material world in a systematic way would be to deny the real influence it has on humans’ experience of their lives.

9 thoughts on “Economics is not about “money””