People think of Sydney being north of Melbourne, but if you went due north from Melbourne until you got to Sydney’s latitude, you’d be 580km due west of the Opera House.

The result of this is different times of daylight. A good friend of mine who works between Sydney and Melbourne says the early sunrises in Sydney get him up and running before work, which he never does in Melbourne. But he misses the languid light of Melbourne’s evenings after leaving the office.

Both sunrise and sunset are later in Melbourne, all year round. This graph shows sunrise, and sunset a for both cities. Melbourne is the yellow and red lines, Sydney the green and purple. The difference is almost an hour.

The difference manifests itself in interesting ways. I reckon Sydney’s surf culture is nourished not just by the warmer weather and better beaches, but also by the fact there’s hours of sunlight before work. The pop-culture phenomenon that is Aquabumps could only thrive in Sydney.

There’s evidence of a much stronger early morning workout culture in Sydney too.

The Sydney-siders seem to be making the most of their early mornings. Are we Melburnians missing out?

What we get is a bit more evening time to spend outdoors. This works well for Melburnians in summer, when, for example, the Sydney Botanic gardens shut at 8pm and the Melbourne Gardens are open til dusk.

Much like daylight savings, being further west in a timezone moves daylight to the after work hours.

The great advantage of having more light in the evening is supposed to be using less power around the home. But because of the different energy mixes between Melbourne and Sydney, (the southern capital uses a lot more gas) and the temperature differences, it’s hard to compare. And with the declining role of lights in electricity use, and the rising role of air conditioning, sending people home from work in the heat of the day may have the opposite effect.

So which is better?

The concept of solar time means you can measure which timezone is closer to “accurate.” This maps shows Melbourne is in the red, with an assymetric sort of day, and Sydney closer to balanced. If Melbourne’s time zone explains my tendency to get up late and stay up late, it has a lot to answer for. 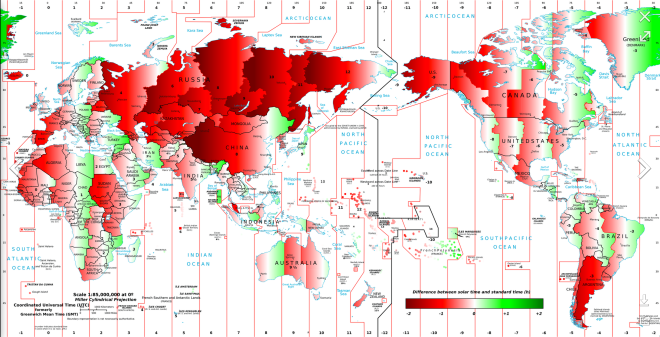 The case for finely balanced time-zones is most obvious where they are absent.

China uses just one time zone, creating giant differences between one end of the country and the other. During daylight savings, the sun sets at 10pm in Lhasa, and two hours earlier in Shanghai. 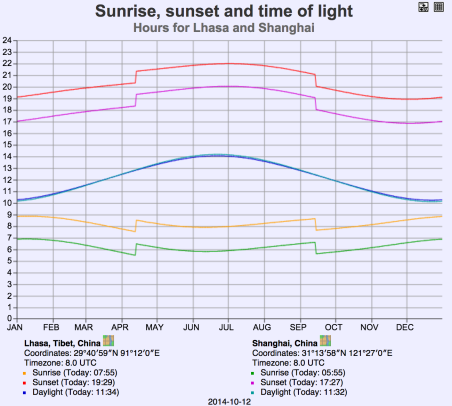 The vast majority of the world is in the red, suggesting people like the evening hours to be daylight. But if you look closely, a lot of very dynamic cities are in the green parts of the map: Tokyo, New York, LA, Shanghai. Perhaps there’s something to this “early to bed, early to rise” idea.

Should Melbourne perhaps change time zone? If we moved to Adelaide time, we’d see sunrise as early as the Sydney-siders do. Then the only reason not to spring out of bed and do exercise would be the weather!

5 thoughts on “The real difference between Melbourne and Sydney: Longitude”