A fair way to broaden the GST, collect more revenue, and avoid increasing the burden of the less advantaged would be to extend it to education. 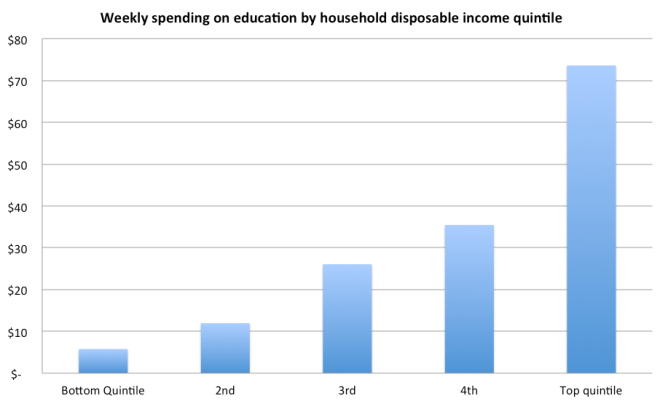 Education spending shows more of an association with income than even alcohol, clothing, vehicles or holiday accommodation.

Taxing education has the potential to make Australia’s GST fairer. Perceptions that it is unfair are a major impediment to reforming the GST.

The GST is regressive. (nb. I had to figure this out the old-fashioned way after being unable to find a single publication that contained this data.) Lower income households pay more of their (equivalised disposable household) income in GST than higher income households, according to my calculations.

This is not quite as regressive a tax as I had assumed. The exemptions agreed by the Democrats and the Coalition in 1999 make a difference. Without exemptions, the GST would be even more regressive.

The definition of a progressive tax is one where the rich pay more as a percentage of their income. Levying GST on education will not turn the GST into a progressive tax. But it moves it in the right direction.

You can see the comparison a different way in this next graph.

The estimated revenue gain of taxing primary, secondary and tertiary school fees would be around $1.2 billion.

One is pure politics. Education is seen as A Good Thing. Even though Australia would continue to provide free and universal school education, a decision to tax education expenditure would cause confusion and dismay. I wrote just yesterday about how insufficiently distinguishing sin taxes and revenue taxes causes trouble, and this would fall right into that trap. This government would also face the problem that its supporter base are more inclined to be patrons of private education. (I should note here that I am not biased against private schools, having attended one myself.)

The second comes to the exact question of fairness that prompted my investigation into how GST could simultaneously be extended and made less regressive.

The association between education expenditure and household earnings is not simply a matter of wealthy people sending their children to private schools. The period of peak earnings in a person’s life is also commonly in their 40s – the period where they have children in secondary school. In other words, the statistics insistence that education spending is a luxury good could be more of a life-cycle artefact.

Nevertheless, the same is true of many types of expenditure, and an opportunity to plug a hole in the GST – and do so fairly – is rare enough to be worth grasping.