This chart from a Grattan Institute report was used as a hand grenade in a war over house prices on Twitter a couple of days ago. Union economist Matt Cowgill argued house prices may be too high if they are pushing people out of the market.

Another economist, Stephen Koukoulas, argued everything was fine and you should just go and borrow from the bank since interest rates are at record lows.

(Just as a declaration of my interest, I’m 32 years old and do not own property.)

Some people argue house purchase has simply been delayed, just like moving out of home, getting married, and having children

This is a pretty good theory to explain the above. But it doesn’t do such a good job of explaining the declining rate of first home purchase. That has hit a record low of 12.3 per cent in the most recent data. 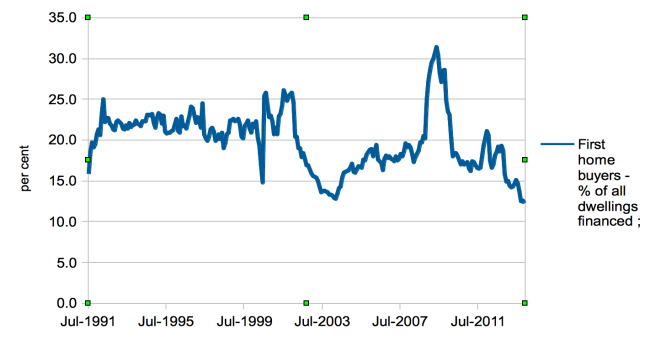 You have to assume that low – which coincides with recent house price growth – is temporary. So what will give?

Will we observe a quiet tsunami of saving that allows first home buyers to collect together huge deposits, then climb back into the market with heaps of spending power?

Bad news if you are relying on that. Gen Y is not scrooging it up.

While young people’s net worth rose around 25 per cent in this period, the price of established homes rose 40 per cent.

So will the 65+ demographic eventually be forced to release their vast real estate holdings onto an anaemic market?

Can we conclude that house prices are going to fall?

The x-factor in Australia’s housing market may be off-shore buyers. Chinese wealth is pouring into the market at both ends, propping up the value of both million dollar mansions and cheap apartments.

One real estate agent recently told the ABC that 90 per cent of homes were selling to Chinese investors. Hyperbole, obviously. But even 1 per cent is cause to pay attention.

Economists understand that markets operate at the margin. It doesn’t matter what most people do so long as at the margin there is one bidder with deep pockets.

So long as foreign wealth, and especially Chinese wealth keeps accumulating, domestic dynamics are only part of the picture. I intend to return to this topic soon, because the pace of accumulation of Chinese wealth is now not just a historic record but a gigantic outlier. Whether it can continue is of intense relevance to all of us, and there’s plenty of people who think a crash is coming soon.

6 thoughts on “Why house prices are going to do what you least expect.”