If I was going to make an investment or start a business in this economy, there’s only one industry I’d be looking at.

China has been the source of an enormous boom in inbound tourism to Australia, and Chinese tourists are the biggest spenders in Australia. But it is probably just beginning.

Australia has a great experience to sell, but while our dollar was lingering at record highs, growth from our most familiar markets stalled. 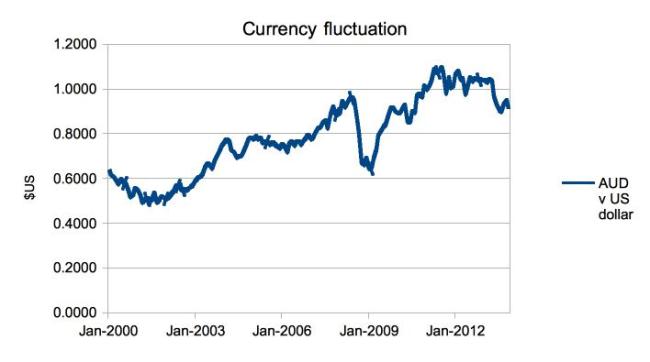 It was not helped by the fact that economic growth in the US and Europe basically stopped in the last five years, meaning they took fewer holidays.

Tourism has many sources of growth. It stands at the confluence of the China transition story, the falling dollar story and the western world recovery story.

So it’s time to leave the swivel chair and open a motel? A tour bus that zig-zags through the vineyards on beautiful sunny days? a paddle-boat rental business?

Even though barriers to entry are low, Australia’s tourism sector may not see supply respond adequately to increased demand.

Don’t worry about government helping the sector. Tourism doesn’t even have a titular minister in this government.

Supposedly tourism is under Trade Minister Andrew Robb, but since his ascension to the portfolio, no media releases, speeches or transcripts have mentioned it. Don’t worry about money pulled out of Holden being used in the tourism space.

Unlike mining, the industry has only a few notable spokespeople. The biggest company in the space (hint: it starts with a Q) has bigger fish to fry right now than worrying about the industry as a whole. It looks like demand will outstrip supply for a while yet, so opportunity remains.

WHAT INVESTMENT TO MAKE?

The listed space is not big but there is money to be made. Crown and Virgin offer exposure to tourism. Flight Centre too, but I’ve already expressed my distaste for that business model.

Want to be more adventurous?

Other options include an indoor skydiving company with $49,000 in revenue in the most recent quarter but a market capitalisation of over $60 million. (Indoor Skydive Australia’s share price tripled after floating in January. How long until gravity kicks back in? The two headline writers still employed in the financial press are licking their lips…)

Ski resorts Mt Hotham and Falls Creek were recently acquired by Merlin Entertainments, the UK listed company that also owns Madame Tussauds and Legoland. It floated in November at 315p and was this week trading at 349p.

I imagine you can buy a smaller ski resort cheaply – if you’re a climate skeptic, put your money where your mouth is because they’re the bargain of a lifetime! If you’re more scientifically inclined they also provide the ultimate hedge against rising sea levels…

The simplest way for the rest of us to get into the tourism market is probably Airbnb. Post a professional looking ad for a room, a granny flat, a holiday home or your own home, and watch the cash roll in.

The highest price on Airbnb right now is for a “a magnificent 5 star prime waterfront property recently built with a resort style atmosphere in mind” on the Gold Coast. It’s renting at $1406 per night.

The cheapest is $9 a night for a place on French Island in Victoria. It is described as “Just a wild coastal bush block, with no home.”

The tourism space is moribund, really. We have been depending on our existing resources – a big rock, a big reef, a big bridge, a big pineapple – for too long. If we’re really going to take off, we need new ideas!

What amazing things have you done overseas that we could and should offer in Australia? What does Aussies have that hasn’t been offered to tourists yet?  Comment below.

3 thoughts on “How to turn holidays into cash”