I really loved the Killing Season. A beautifully-made story about the most interesting period in recent Australian politics. It took Canberra’s political life seriously. I think we could have our own West Wing now – previously the closest we could manage was the satire of the Hollowmen.

The story, told by veteran journalist Sarah Ferguson, will scoop the pool at the Walkleys – the journalism industry’s own award night.

But it omitted a major angle. The role of the media in the downfall of two Prime Ministers.

This could be simply a matter of editing. Trying to fit months of excitement into an hour of TV means things must be skimmed over.

But there is a set of incentives at play that makes me think this omission is more fundamental.  Before the narrative congeals and sets, I think remembering the role of the media is important

This tweet from Sky News anchor Aaron Young on the day Rudd knifed Gillard illustrates the media’s urge to write themselves out of history.

The political journalist’s job is absurdly stressful and difficult. I doubt many people could imagine how precious time is for a working journalist. Deadlines don’t just loom. They crash down. There is scarcely time for typing, let alone time for reflection.

Pondering the role of the media in shaping political events is a job for retirement. Their job is to get stories out the door. Now.

Even if journos wanted a critical reflection on the media, where would it be found? The mainstream media is not in the business of introspection. [I did find this 2013 Crikey piece pondering the media’s role.]

So the press gallery favours a paradigm where they merely observe and report. If speculative reports come true, the paradigm is only strengthened.

But of course media practice changes politics. Without the media acting as it does, we’d not have half the policies we do. Boat arrival reporting drives asylum-seeker policy, for example. The media’s lens made John Howard trim those eyebrows and Joe Hockey get lap-band surgery. It drives soundbites and policy on the run.

But this is not a major subject of the thinkpieces that damn modern politicians’ inadequacy.

As in any mob, no individual can be blamed. Picking on Grattan or Oakes or Lenore Taylor is silly. There are around 180 journos in the official press gallery, from dozens of outlets. Then thousands more weighing in from beyond Canberra.

Indeed, the media organisations can throw up their hands too, and say they merely serve an audience. If those stories did not draw frenzied millions of clicks, they would not publish them.

But having no individual at whom the finger can be pointed doesn’t matter for a meta-analysis. The reporters and outlets can be basically innocent and the industry very much implicated. (Much like the problems within Labor don’t end with Shorten or Gillard, or even the people who responded to those polls ‘Dasher’ Dastyari was so smitten with.)

Having been in the media and seen how much power there is, how lightly governed it is, and how much you can get away with, it’s amazing. The reaction to the Finkelstein inquiry told me a lot about the power of the media.

An enquiry into media regulation by a respected Federal court judge known as ‘The Fink,’ it got an extremely hard time in the media – when it was being reported at all. (The inquiry recommended things like newspapers reporting corrections and press council adjudications prominently.)

But the media is not above reproach. 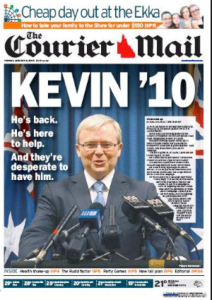 The Killing Season included at least two examples of politicians backgrounding journalists with information that may well be fake. Arbib saying he’d reconciled with Rudd in 2013, and the SMH reporting Rudd was checking his numbers in 2010.

Reporting off-the-record comment means that the public can’t check its veracity. It requires utmost trust in the reporter. That trust was eroded during the period in question.

But off-the-record comment is just a small moving part in a  big machine. The influence of the media on politics is like the water fish swim in – so pervasive they don’t notice it or question it.

To extend the water metaphor, let me say this. Politicians would be starved of oxygen without the media. But the life-giving force also contains vicious currents that affect the posture and behaviour of the politicians it sustains. Like a current in the water, we can normally only identify it by the ripples.  The events of the Killing Season were more like a period of breaking waves.

Note: I can see the response this piece is going to provoke : “Mate! Did you even watch the Killing Season? Labor ate itself! The media didn’t need to help it.”

But that’s a simplified version of history. Let’s not forget Mr Abbott was also nearly consumed by leadership speculation too. Would that happen if this was just a Labor problem?

Also, don’t let the narrative set in your mind until you’ve read Gillard’s book, in which the negative impact of the media is far more central. (She released excerpts to the press yesterday, but it somehow didn’t seem to get much coverage. Odd…)

6 thoughts on “The big thing missing from The Killing Season”