They say people who live in glass houses shouldn’t throw stones. I say, but I’ve amassed a small pile of rocks! What else do you expect me to do with them?

I subscribe to The Age. Mostly I forgive the mistakes that plague the website. But today I decided I’d do a quick count of screw-ups, and found more than I expected. Just scanning the front page, without even clicking on an article, I got to ten. There may be more.

Here they are, from bottom to top.

The sports section was quite clean. Headlines get to be quirky so we will let ‘Mayweather looks to cash‘ slide by. Let’s also assume that Adelaide’s sensation six were touchy-feely, not sensational.

The lifestyle section has also done an okay job. But the headline on the “ghostly” photos story has a redundant apostrophe-s in that’s. This one is especially galling as that is not breaking news. It has been in the fluff section for several days.

The Entertainment section looks to have been partly scrubbed by a sub-editor. I’m guessing the original headline was “Are Block couple our biggest TV winners?”

A vigilant sub-editor has decided couple is a singular entity, changed Are to Is and left winners dangling there. Wrong. I’d permit: “Is block couple our biggest TV winner?”

Also, is it possible the sub-editor is Russian? That might explain why Le Nevez is breaking “the hearts“, not just hearts.

The property section is almost a frenzy of typographical misadventure. “Way in“?? That’s the only one on the whole site I can’t forgive (the expression is weigh in).

Special mention to auctions results (should be auction results), and sets in the sentence ‘Reserves were smashed as renovation show sets a surprise television record.’ (It should be set.)

Let’s ignore the capitalisation of the word eggplant, and focus on the headline that left the Philippines newspapers. It presumably left them looking foolish before an editor changed the second half of the sentence. Now the publication that is “just wrong” is The Age. The best resolution I can see is It was a dramatic headline in Philippines newspapers but it was just wrong. 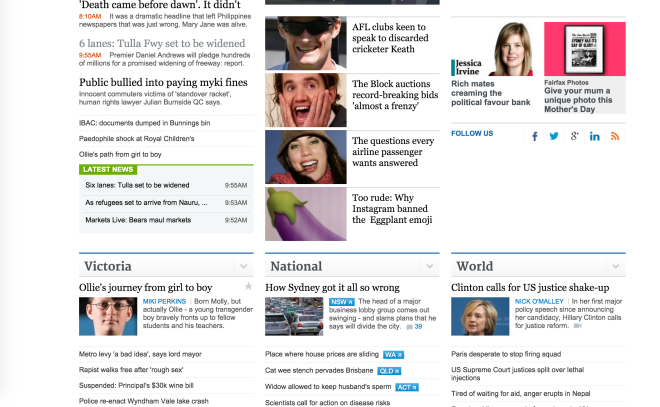 The best news gets rushed out, and as such the top of the page is where most typos are found.

On the right, might the “Nepal man” be Nepalese? Or is it supposed to be Nepal: Man pulled alive from rubble?

The write-off for the political story is also quite a cliff-hanger. “… with one MP saying.” It raises all sorts of questions, especially who and what?

There are also two full stops on the write-off for the second story.

Does all this matter?

The enlightened reader knows they are at a newspaper to get meaning.  Some people are very forgiving of typos, although they tend to be journos themselves! These typos are not so bad that they affect the meaning of the sentences they appear in. Shouldn’t we just accept them as the price we pay for fast cheap news?

The problem for newspapers that have sacked in house sub-editors and outsourced/off-shored sub-editing is that typos still matter to some readers. Research suggests typos erode trust.

This comment on a Crikey story is typical of reader attitudes I encounter. (Although not devoid of mistakes!).

“Apart from typos. and homophone errors, there is also the utter failure to write grammatically correct sentences which often means having to reread something several times – a) what was written, b)what was, possibly/probably meant, c)what the journo. thought they meant and d) asking the budgies if they mind such drek being put into their cage – the cat now refuses to use its tray with SMH liner and goes out to the garden even in the rain.”

This is an economics issue – sometimes an entity needs to invest in costly signalling techniques that don’t directly add value to users but help form their beliefs. It’s like McDonalds cleaning their front windows  – it makes you think the kitchen is clean. It’s like showing up to a job interview with shiny shoes. It’s like a lawyer getting a gold-embossed business card.

Investing in these ancillary items all signal that the product in question is of high quality.

So it is not helpful that there is even a whole Twitter account devoted to Fairfax typos. 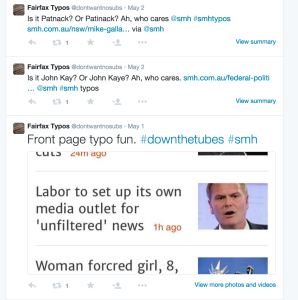 Dear readers. I know most of you are typo tolerant if you frequent this blog. But do you think major news sites have an obligation to be typo free? Share your thoughts below.

ALSO: $10 bounty if you find a typo in this blog post! I’ve tried my best to be perfect!

8 thoughts on “Ten typos on The Age website’s front page this morning.”