This year’s Nobel Laureates got a raw deal.

The prize of 8 million Swedish Kronor was the least valuable prize awarded since 1990. Eight million Swedish kronor is worth $1,280,000 in Australian dollars, which is nice, sure.

The value of the Nobel prize has varied a lot over time. Alfred Nobel gave the Nobel Foundation 31 million krona in his will, with instructions to give prizes to those who have conferred ‘the greatest benefit on mankind.’ The first prize was 150,000 krona, (worth 8 million krona in today’s money.) 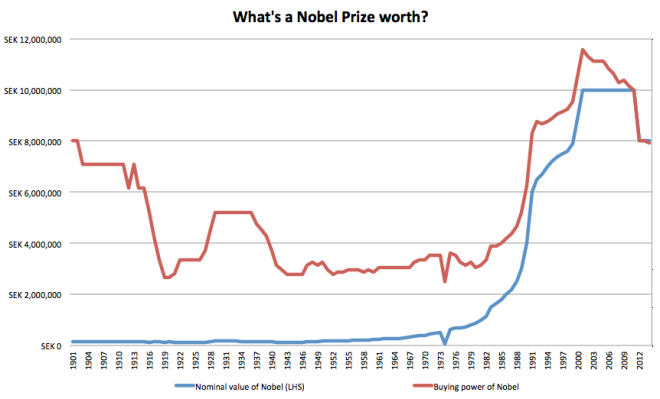 As the graph above shows, the foundation did a pretty bad job of protecting the buying power of the prize. The value of it fell steeply pretty much straight away. Some of the investment downturns coincided with World Wars and the Nobel Prize reached a low ebb in 1945 when its buying power was less than 30 per cent of in 1901.

Of course, that was the lucky year for Australia’s Howard Florey. Not only was his prize worth the least ever, but he also had to split it with two others, Fleming and Chain. That’s what you get for inventing penicillin.

The Nobel Foundation now has a very large sum of money. They turned the initial 31 million Krona into over 3 billion today, and give away just about a quarter of a percent of that total for each prize (of which there are six).

Nobel instructed the money to be invested in “safe securities.”

The wild variation in the blue line above suggests that is being interpreted fairly liberally.

And when we dive into the Nobel Foundation’s annual report, we can see they are invested quite aggressively. 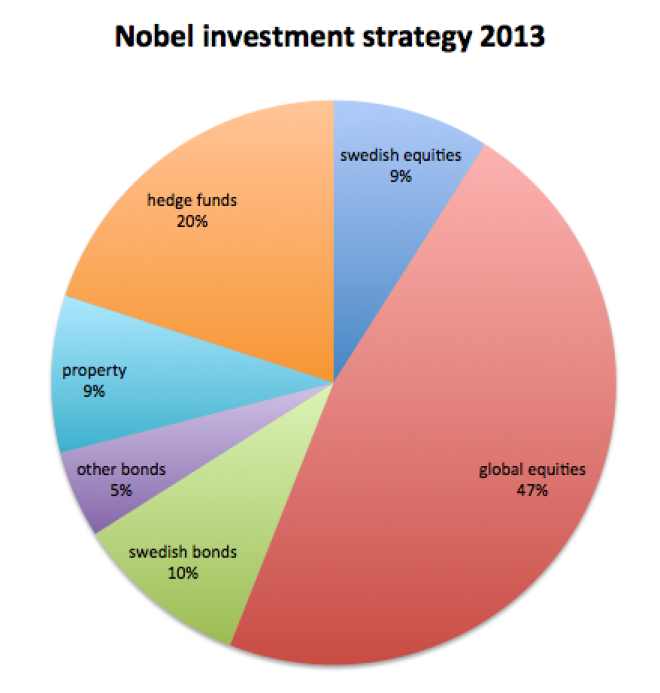 So if you have a Nobel Prize winning discovery, my advice is to save it up and release it in a year when the global stock-markets are doing well.