The RBA kept official interest rates on hold again today at the record low of 2.5 per cent, while actual mortgage rates are low and falling: 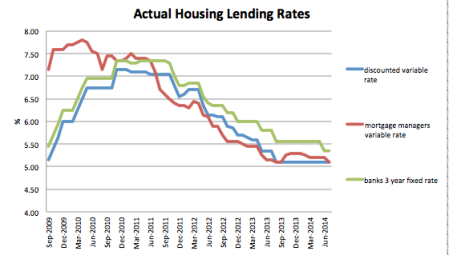 So could house prices actually rise from here? One economist whose blog I read has built a buy/sell indicator. It’s currently on buy.

He reckons house prices will keep going up while the mortgage rate is not much more than the rental yield. He also theorises that Sydney prices rise first, and the rest of the country lifts thereafter. This theory holds water for me on an intuitive level. In the short run, a house in Melbourne is not a good subtitute for a house in Sydney, but in the medium term, perhaps it is. In the long-term, perhaps even a house in Adelaide could be a substitute!

But house prices in Melbourne seem a bit high to be making bold acquisitions for speculative purposes.

Luckily, house prices are very different across Australia. Sydney is way out in front. Perth, Melbourne and Canberra are a cluster. Then Brisbane and Adelaide are limping along at the back of the pack. Hobart doesn’t make the graph but it is somewhere back there too.

If you wanted to buy a house somewhere cheap, which makes most sense?

You’d want to choose a place with strong growth prospects. In recent times, all three laggards (Brisbane, Adelaide, Tassie) have shown a bit of pluck when it comes to the labour market (focus on the yellow lines).

But you want to be careful. Tasmania’s prospects are pretty dire, as discussed in this piece: How long until Tasmania is totally empty?

So which city are people most likely to move to?

The Brisbane connection looks to be the smartest option. Hmm, how much is one of those famous Queenslanders (a wooden house on stilts)?

Now, despite its “beautiful one day perfect the next” weather, Brisbane doesn’t rate a mention in the top ten cities ranked by the Economist for liveability.

Melbourne scoops that award every year (Adelaide came 5th this year in results released today). But while we are being open-minded, it’s worth noting that that survey is horribly biased.

If we broaden our horizons we find that Brisbane makes the top 25 list for the much hipper Monocle Magazine quality of life ranking, getting a shout out for its excellent Gallery of Modern Art.

Is that enough to make you want to purchase your own place in the sun?