Americans, the hypocrites, will not stop complaining about the flight to Australia.

“I want to go to Australia, but I can’t stomach the thought of the year long flight….ugggh.” (source)

“I really want to go to australia but at the same time the flight is just soooo long, and everything there is poisonous” (source)

“Flying to Australia is a long arduous experience” (source)

And yet they consider driving across their vast, lumpy and obese country a simple jaunt! A petit amusement! A mere caper!

This graph shows that lots of people who can easily afford to fly will still happily ride the Interstate for hour after arduous hour. Among people earning over 100 grand, twenty per cent of trips of 2000 miles are done by car! 20 per cent!!

Just for reference for our Australian readers, an example of a round trip of 2000 miles would be from Melbourne to Byron Bay, AND BACK.

There should be millions of Americans trampling all over our fine brown land all the time.

The proportion of Americans with passports has risen from 3 per cent in 1989 to over 33 per cent now.

And yet growth in American tourism to Australia has been stunted, showing no growth at all in a decade, until a welcome recent blip. The cheap airfares that have had Aussies hitting up the States in record numbers apparently leave our American confreres ice cold. 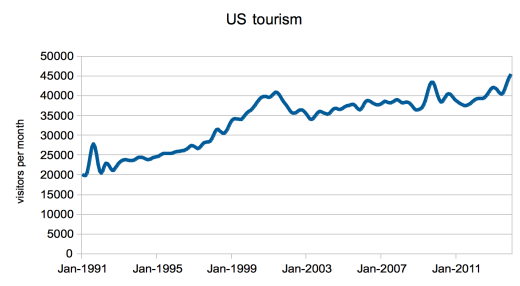 What Is Happening, America? Why You No Come Here?

Are they wholly xenophobic? Can we blame Lara “where the bloody hell are you” Bingle? Or is it our famous racism? Or are they more concerned about our drop bears, redbacks and large, fast-moving and highly venomous snakes?

Perceptions of safety can scarcely be the issue. It turns out the favourite destination of Americans in selecting their overseas travel is Mexico, with a 33 per cent share.

Oceania (presumably including those hobbit-botherers across the ditch, plus Tahiti, Fiji, etc) gets just 0.9 per cent. [source]

Canada gets 20 per cent and Europe is next with 19 per cent. Europe! What have they got that we don’t? Europe is at least 7 hours flight, NY-London, and as much as 14 hours if you try to go from LA to Helsinki.

The American excuse that it is *just too far* is clearly made up. Which leaves us in an unhappy place. A place where we need to face a discomforting possibility.

Can we handle the rejection?

2 thoughts on “Why won’t Americans suck it up and fly to Australia?”