We have got so used to leading New Zealand in all matters (possibly excluding rugby) that the facts of New Zealand’s economy break into our consciousness only slowly. 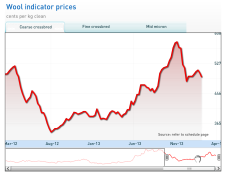 But here is the truth: New Zealand’s wool industry is a golden fleece and its dairy industry is a cash cow. The Chinese consumer’s taste for consumption is fuelling demand for soft commodities that is making Aotearoa like Perth. They are enjoying a “dining boom” just like our mining boom.

That’s happening at the same time as free-market policies pushed by right-wing Prime Minister John Key, so that New Zealand is coming out of the GFC far richer than it went in.

The rum in the punch at this prosperity party is Auckland property prices, which have risen wildly in the last two years. 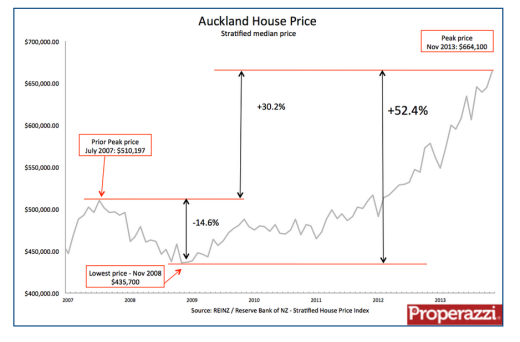 If you’re a beneficiary of the great kiwi boom, you might like this “choice as” property offering:

The property price boom is spreading even to the unfavoured areas of Auckland.

Another sign of the booming Kiwi economy is their dollar. We may soon be on the wrong side of parity.

And it’s not just Auckland where house prices are booming. Ordinary homes in out-of-the-way parts of the South Island are also priced oddly high. 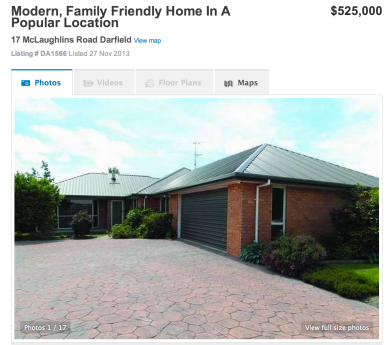 The other great explanation for this is low low interest rates. Australia got its official cash rate down to 2.5 per cent just last year. New Zealand has had rates at that level since March 2011.

The rise in house prices has been so marked that the government introduced special laws to try to cap price rises. They have tried to limit the value of loans going to borrowers with low deposits.

So can these high house prices be justified?

New Zealand is still not as rich as Australia, minimum wage there is $13.75, compared to $16.37 in Australia. Average and median earnings are lower too – Kiwis earn 26 per cent less.

When I think about New Zealand’s housing market, I get the feeling it it is self-evidently frothy. That the bubble will pop. That the end of all this Will. Be. No. Good.

That is almost exactly the same patronising attitude all these flown-in experts have when they talk about the Australian market. Here’s the latest one, printed just hours ago.

So what can we learn here? That an outside perspective on house prices can feel very different from an inside perspective? That rapid growth should ring alarm bells? That the Chinese demand may not be as guaranteed as the Kiwi market seems to believe? Or just that we should have bought in Auckland two years ago?