This is Part Two of the series. Part One is here. 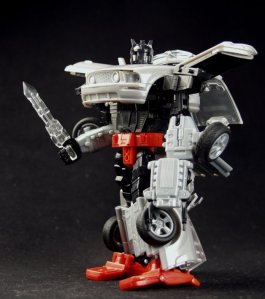 So if you thought electric windows were the bleeding edge of autonomy, think again.

An Italian team is sending two cars on a mission. From Parma to Shanghai.  With no drivers for 13,000 km. They’ll arrive in time for the Shanghai World Expo, theme: Better City, Better Life.

And that’s the great thing about autonomous cars. They have the opportunity to transform cities. Safer for drivers and pedestrians, and avoiding the kind of behaviour that can cause traffic jams.

Autonomous cars in convoys will break the relationship between traffic density and flow.  Coordinating movements means we don’t need to worry about reaction times – we can have high-speed, bumper-to-bumper traffic.  Also, by reference to a central computer system, autonomous cars may take the route that contributes least to congestion.  From a pedstrian and cyclists perspective, we can also expect predictable behaviour from autonomous cars.  While their sensors may not be the match of a human’s senses, at least they will all act the same way given identical stimulus.

Does it feel too futuristic?  Compared to sitting there high above the Atlantic in seat 47G, watching an Adam Sandler movie, drinking your apple juice, knowing that the pilots are talking about which hostess is hottest, while a computer flies the plane? Compared to Vancouver’s driverless skytrain?

The US Army sponsors a competition to create driverless vehicles. It has been run three times. Round One, in 2005, the furthest a vehicle got was 11 km. In 2006 five of the 23 entrants went the full 240 km of the course. By 2007, the competition had graduated from remote roads to an urban environment, and the winner was able to safely proceed for four hours at an average of 22.5 km/h, all while integrating with traffic.

“You can put your life in the hands of a computer if you want, but I’m a safe driver.” Consider this: 109 people died on Australian roads in March 2010. The current system is not at all safe. Think about the reverse transition. If we had an automated system and were proposing that citizens be allowed, after minimal training, to operate their own vehicles, there would be an uproar.

Cognitive biases (loss aversion, risk aversion and the endowment effect) converge in a spectacular explosion of irrationality that may make

us unwilling to trade in our risky system.  Thaler (1980) (ref: here) found that people were unwilling to trade a one-in-a-thousand chance of immediate death for a prize of $50,000. But to remove a one-in-a-thousand chance of immediate death, they wouldn’t pay more than $200.  Hence the tiny risks of the autonomous system are costly to us, while we are not willing to pay to remove the real risks of our current system!

That said, I fear for autonomous cars in certain unusual circumstances. Humans brains are bad at the repetitive but good at the unexpected. We can react to situations we have no experience or instructions in how to react to, like a collapsed bridge, a parade, traffic lights being down, seeing a tennis ball bouncing down a suburban driveway, or ducklings on the road. An autonomous car would probably just mow down the ducklings, and emit a robot laugh.

SO the Italian Vislab team has two cars to send to China, along the silk route. The front car has its route chosen for it and human intervention is available in case of crisis. But the follower is 100 percent autonomous.  Sadly, the car has exactly no sci-fi chic: :

Will we all end up in autonomous cars?  Share your views below!