At the intersection of ubiquity and stupidity, lies my nemesis.  The traffic light. 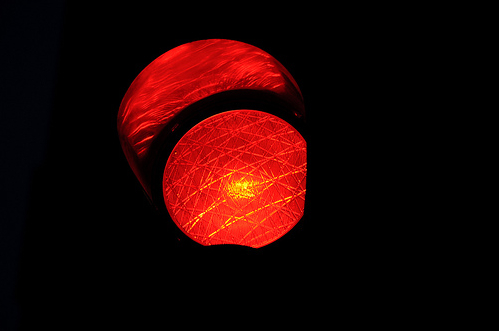 I am stuck at the traffic light for no discernible reason.  No cars are coming.   The red light has me pinned down like a gleeful high school bully.

This is the traffic wave effect, expressed in beautiful, scientific detail here.

The traffic light thinks it can boss everyone around cause it’s the smartest guy in the room. Wrong.

At an intersection, in every car,  there is computing power equal to at least a million pentium 4 chips.   Not in the dashboard, but in the driver’s head.  This computing power wants to get its host where they’re going as speedily as possible, while remaining adequately safe. The traffic light lets this computing power sit idle, looking at the babes in the car alongside, and singing along to the Black Eyed Peas.  ‘I gotta feeling...’. A good system needs to leverage this power.

People aren’t supercomputers though. It’s important that when we try to leverage all this computing power we provide a simple set of rules.

What are our options?

The 4-way stop is the Devil’s work, so we can rule that shit out.

The Yield works only where one street has permanent right of way. This could work for a lot of traffic lights that mediate between a major road and a minor one.

Shared space is about removing all lane markings and signage to create safer behaviour. It’s just code for anarchy.  I think it’s the opposite extreme to traffic lights, and I’m not sure it will work in enough situations.

Or, finally, the roundabout.  Ahh, my love!

When a flow of cars is going through a roundabout, they continue uninterrupted, like a babbling brook.  Traffic waves are minimised.  But whenever a gap emerges, someone can take it, like a lone traveller crossing a mountain stream. The flow of cars continues around him.

Why does it work so incredibly well?  Because traffic is slowed down and the road shape becomes a curve, a roundabout creates spaces for merging where a straight road would provide none. And because people are actively engaged in the decision making!  Even better, they only need to look in one direction (In Melbourne, you look right.  In Berkeley, you look left.)  It’s like merging onto a one way road. Very bloody simple.

The condescending trio of Messrs Red, Amber & Green has hypnotised us. Worse, we have consented to it. Like a lonely poker machine player, we cannot break our addiction to the flashing of the lights, and their lulling certainty. This is a wake up call! Traffic signals are the opiate of the masses.

What do we want? No more traffic lights! When do we want it? Roundabout now!

Who else hates being dehumanised by the glowing scarlet bulb?  Do you have better ideas than the roundabout? What can’t a good roundabout do? if your intersection comprises three six-lane boulevards, two tram routes, several other streets and roads carrying frequent ambulances, many cyclists, myriad drunken students, is a roundabout is the solution…?