There’s a push to add an intelligence/aptitude test to the mix for university admissions.  It’s an indirect and stupid way to solve the problem of the homogeneity of  university intakes.

I’m a product of the Equivalent National Tertiary Entrance Ranking system. If not for the ENTER, I would never have gone to study economics at uni, never worked at Treasury, never gotten fed up with the public service and never started this blog.

The amount that hinges on the ENTER meant I took it seriously. Because there was no other way to get into university, and I had no idea what else I could do, I worked hard in year 12. I have never worked so hard before or since. This, no doubt, was good for me.

However, I went to a posh school, and there’s no doubt that in another environment, I would have scored lower. Not because the instruction was particularly good, but because the kids there were all competing. Enter wasn’t just something the school or teachers wanted for us. It was something we wanted for ourselves.

Melbourne Uni is full of people with good ENTERs. It is also full of people who went to posh schools. If I recall correctly, about 40 percent of my graduating class went there. Meanwhile, most public high schools sent at most a handful of graduates there.

Miller and Birch (2005) and Dobson and Skuja (2002) show that on average, students who attended non-selective public schools have gone on to outperform students who earned the same ENTER at Catholic, Independent and Government selective schools. Their first year marks are four points higher. If ENTER is intended to predict university performance it is failing in a systematic fashion. 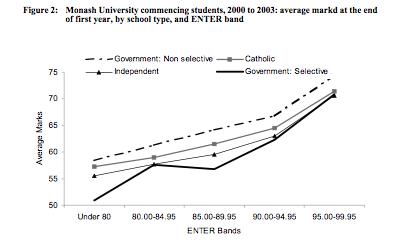 Graph courtesy of Dobson and Skuja

If the under-representation of the publicly high-schooled could be rectified by diminishing the importance of the ENTER, that could be good for enhancing diversity of the student base, and for meritocratic justice being served.

However, the IQ-style SAT test is not necessarily the answer. It is increasingly understood that IQ measures a fluid ability. If the brain is a muscle, IQ is its ability to lift. Under the right training (i.e. changing the environmental stimuli), IQ can improve by up to 20 points, as this Time Magazine article from 1938 argues, and this somewhat more up-to-date paper confirms.  I bet private schools would prove just as good at tweaking their students SAT scores as their ENTERs.

Malcolm Gladwell notes that average IQ scores have been rising since they were invented, and, quoting intelligence researcher James Flynn, has a go at the overall concept of IQ:

The best way to understand why I.Q.s rise, Flynn argues, is to look at one of the most widely used I.Q. tests, the so-called WISC.  Scores in some of the categories—those measuring general knowledge, say, or vocabulary or the ability to do basic arithmetic—have risen only modestly over time. The big gains on the WISC are largely in the category known as “similarities,” where you get questions such as “In what way are ‘dogs’ and ‘rabbits’ alike?” Today, we tend to give what, for the purposes of I.Q. tests, is the right answer: dogs and rabbits are both mammals. A nineteenth-century American would have said that “you use dogs to hunt rabbits.”

“If the everyday world is your cognitive home, it is not natural to detach abstractions and logic and the hypothetical from their concrete referents,” Flynn writes. Our great-grandparents may have been perfectly intelligent. But they would have done poorly on I.Q. tests because they did not participate in the twentieth century’s great cognitive revolution, in which we learned to sort experience according to a new set of abstract categories. In Flynn’s phrase, we have now had to put on “scientific spectacles,” which enable us to make sense of the questions about similarities. To say that Dutch I.Q. scores rose substantially between 1952 and 1982 was another way of saying that the Netherlands in 1982 was, in at least certain respects, much more cognitively demanding than the Netherlands in 1952. An I.Q., in other words, measures not so much how smart we are as how modern we are.

Even the Americans are growing wary of their SAT (Scholastic Aptitude Test) system:

“A growing number of colleges and universities believe the SAT has strayed from its original intent and become susceptible to economic influences. With the rise of a highly profitable coaching industry and College Board data showing that SAT mean scores rise proportionately with income levels, there are serious doubts as to whether the SAT score is a reliable predictor of college success.”

Any SAT-style test can and will be studied for. At least if people are struggling to improve their VCE marks, they are actually learning subject matter. To do as Americans and spend hours each day studying for a test designed to measure innate aptitude is surely a waste…

If we want undergraduate populations to reflect the diverse populations of people that have the best chance of success, rather than the narrow slice they currently consist of, another way must be found.

Miller and Birch suggest adding points to the ENTER of a Government school graduate.
Would this work? Or would Government school enrolments simply be swelled in year 12 by students crossing at the last minute to obtain the benefit?

Would the benefit of year 12 be lost if an aptitude test could substitute for the hard yards? What do you think?