Want to know what you’d do if you suddenly got rich?

One way to find out is to listen to rappers.

“Cup of Ace, cup of Goose, cup of Cris
High heels, somethin’ worth a half a ticket on my wrist”

A very nice new dataset from the ABS allows us to check whether Iggy is reppin in a way that is actually representative.

Data confirms Iggy is legit. Rich people spend more on alcohol. The top quintile by equivalised disposable income is spending 3.5 times as much on booze as the bottom quintile.

As for high heels and watches? Clothing shows a similar pattern, but not as pronounced. For every dollar a poor person spends, a rich person spends three.

So rappers seem to be a good subsitute for data. What about cartoonists?

Sadly this depiction is not backed by the data. When you’re in the top quintile by equivalised disposable income, you’re actually going to spend less on smoking than anyone else. So if you’re trying to fake it before you make it, don’t trust the cartoonists – throw out those Romeo y Julietas.

What about TV shows? Can we trust their depictions of the lives of the wealthy? In The Slap – perhaps my favourite Aussie TV show ever – the richest character is Harry, who has a fancy house and a nice german car. Is that accurate?

The rich buy nicer cars. Far moreso than the poor, with a ratio of 3.3. But notably, not much moreso than the next bracket down. If you want to really foretell how you will spend when you are truly rich, you have to look beyond the driveway to the house itself.

If its rented, that’s a fair sign you’re not in the top bracket. The richest income bracket spends less on rent than the poorest.

But they spend more, a lot more, on housing overall. (Note the scale on the vertical axis. The ratios may be less dramatic but the raw numbers in this graph are the biggest). 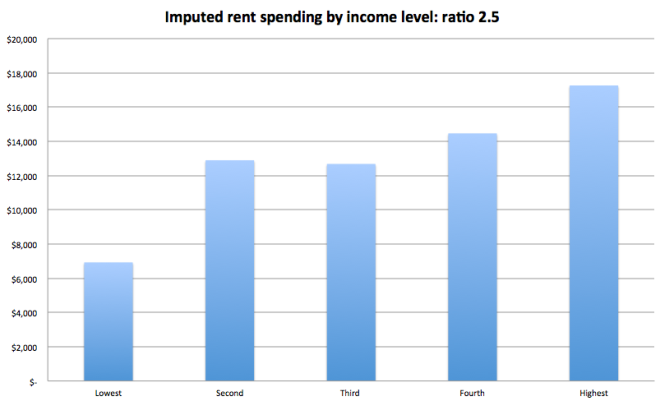 (This graph shows imputed rent, which allows comparison of owner-occupiers).

So thanks TV for being careful with your depictions of the wealthy. The classic big car and big house are true signs of wealth.

But they are not the category that shows the most dispersion. The truest single sign that you’re now loaded is that you get your shampoo out of a tiny little bottle.

When you are rich you might have a lovely house (or two), but you will spend a lot more time in hotels. The ratio of 7.9 between the richest and poorest quintiles is the strongest difference of any of the categories.

Globally, the super rich even live permantly in hotels. In LA, the Chateau Marmont is famous for having celebrities check in for years at a time. And don’t forget Coco “The Ritz is my Home” Chanel.

The second sharpest spending difference between rich and poor is in a category I’ve never seen mentioned on TV and a category only one rapper I know of has ever mentioned, and that’s insurance.

Kanye West name-checks Geico insurance in the 2005 track Gold Digger. it’s not sexy, but there you go. More money, more problems, and more insurance against all those problems.

So that’s a summary of where your disposable income will and won’t be going when you’re loaded. But it’s not the end of the story. Because some of your income isn’t disposable. To find out what I’m talking about, let’s check in with poet/musician/millionaire, George Harrison, and his 1969 song Taxman.

Australia in 2014 might not have a 95 per cent wealth tax like Britain did in the 1960s, but the wealthy still pay a lot of income tax. We’ll know Iggy Azalaea’s not just faking being rich when she channels her George Harrison and releases a song about Treasurer Joe Hockey.