I was reading in Bloomberg about the closure of a whole lot of Golf Courses in America. They’d been built not so much for playing golf on, and more as amenity to drive up the price of surrounding homes.

It got me thinking about how I used to attend the Defence Property Interdepartmental Committee back in 2005 and 2006 and all the arguments that used to rage about shutting down the Australian Defence Force’s many under-utilised golf courses. (link for context)

But it made me think about the efficiency of golf as a sport. It’s not easy to understand how golf courses make money in cities. Golf seems extremely land-intensive.

I wondered how it compared to other sports.

Golf is by far the worst of the lot. I calculated this by assuming four players per hole on an 18 hole course, and applying US golf association rules on the recommended minimum area for a golf course, of 60 hectares.

The question of the land-intensity of sports is – perhaps surprisingly – something I have thought about often. But never before had I bothered to graph it. The reason I’ve pondered it is because of some tennis courts near my house that are used as netball courts on weeknights. As tennis courts, they are lightly used, but when it’s netball night they are brimming with noise and excitement and there are cars parked for miles around.

Even though the courts are used for netball only a few hours a week, these courts probably mean netball to more people than tennis.

The land intensity of sports is a pretty important question for governments trying to make participation in sports accessible, cheap and convenient as the density of our cities rises. When you have to rent space to play on, it makes sense for that space to be minimal.

Here’s another chart, with a truncated vertical axis to show the most efficient sports in more detail. Tennis has a few different entries, because I first measured it on tennis court area, but then, after I added table tennis, I realised I needed to count the recommended area for playing, not just the court area. This means the numbers are not perfectly comparable (I haven’t added areas outside the boundary lines for rugby or cricket or soccer) 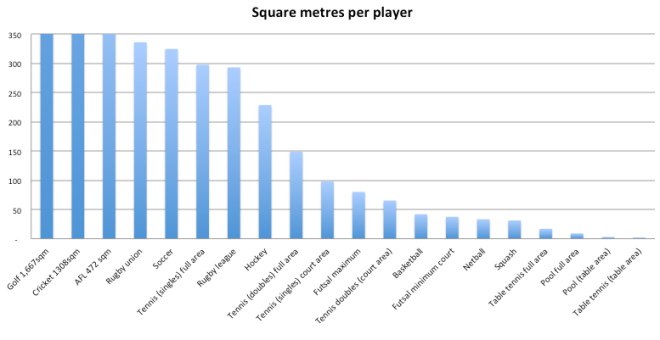 Seemingly, the most efficient sport on the graph is table tennis, counting two players and a table of 4.18 square metres. But that’s not realistic. Players don’t stand on the table.  The most realistic actual entry is pool, which two players can enjoy in 18 square metres, assuming a standard 8-foot table. (I guess that’s why there’s pool tables in pubs, not basketball courts.)

The most land efficient sport in which you would plausibly break a sweat (or break an ankle) is squash. Squash I seem to remember being popular in the 1980s. My dad used to play when he was a lot younger. I’m not sure why it fell from favour, but perhaps Donald Rumsfeld’s enthusiasm for it has something to do with it. Anyway, on a squash court, two adults can do serious work on their heart health in just 62 square metres, making it a sport that is ripe for a comeback in the ever more crowded 21st century. (nb. this doesn’t calculate three dimensional area, and squash courts are tall).

Cricket, meanwhile, comes out of this looking rather bad. My calculations use 17,000 square metres as the size of the field, which is the approximate area of the SCG. Leaving half the players on the sideline is what really ruins cricket’s numbers, because at any time there are only 13 players actually playing. It’s almost as bad as golf. AFL, which uses the exact same fields as cricket, manages to put almost 3 times as many bodies into the same space.

And yet, in contravention of the guiding principles of the ILO Convention on Child Labour signed 40 years ago, hundreds of youth under the age of 15 are being employed by a major and highly profitable Australian enterprise.

Worse, they are without pay despite doing tough physical work in conditions of searing heat.

These embattled and un-unionised “volunteers” must complete a multi-month training schedule to secure their unpaid roles:

“Australian Open Ballkids will also be required to participate in tournaments outside of the Australian Open as part of a compulsory training requirement. These events are scheduled to take place between November and December.”

Sure, the kids seem to like it. “I’ve enjoyed it every single year so far,” 15-year old Mitchell Riley told the Herald Sun recently. “It’s great getting up so close to the players.”

But is it really fair? Prior to 2009, the Australian Open handed out $42 a match to ballkids. Someone has made the decision to cut that to nothing.

Surprisingly it is America where there has been most rancour over tennis officials pay. Half the world’s top umpires boycotted the 2011 US Open in protest at the conditions And in 2012 the US Tennis Association was sued over pay and conditions.

Meanwhile the home of the 35-hour week, France has an all-unpaid ballboy force, working up to 11 hours a day, as recorded in this Economist article

Would it be possible to organise a ball-kid strike? I’d love to see the players collecting their own wayward shots and fetching their own towels. Maybe 2015…

They’re really a bit of a scam, aren’t they?