According to a new working paper by economists at Stockholm University and the University of Chicago, a key factor making unskilled workers worse off is broadband internet.

That means the NBN (which may be the most popular infrastructure investment ever announced in Australia) won’t be good for everyone.

The study had access to amazing data on 80 per cent of firms and 70 per cent of employees in Norway in the period 2000-2008, during which time Broadband Internet was rolled out slowly in Norway, allowing meaningful comparisons.

“For every employee, we know his or her length of education, and annual labor income.”

If you have a university degree, you are considered to be “skilled labor.” The premium for skilled labor increased very neatly alongside broadband availability as it rolled out in Norway. 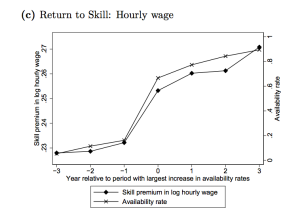 The result for unskilled workers is not so good:

“[T]he estimates imply that a 10 percentage point increase in broadband availability in a municipality raises wages of skilled workers in that local labor market by about 0.2 percent. By comparison, we find evidence of a decline in wages of low skilled individuals.”

The researchers constructed counter-factuals to measure what might have happened in the absence of high-speed internet. They show the gap between skilled and unskilled would have been lower if the optical fibres had never crossed the fjords..

Broadband internet is obviously putting the postman out of work, but it is apparently having a less obvious effect on a range of other routine but non-manual jobs. This is very much worth bearing in mind as the internet enriches and enlivens our lives in so many ways.

This is not an argument against the NBN. We need high-speed internet and we’re going to get it one way or another.

It’s an argument for being aware that some people get left behind. The smartest policy we can institute to deal with that is high quality, universal education. This should start with high quality earl childhood education (this is extremely important to ameliorate skill-gaps that can develop in disadvantaged populations even prior to starting school), extend through good quality public schooling (needs-based funding as per the Gonski Report is a good start), and culminate in excellent universities that remain highly accessible (this would probably preclude the deregulation currently being proposed by the federal government).

I’ve written before on the National Broadband Network, under the following headings:
National Broadband needlessness.
National Broadband Nuff-Nuffs.
I believed the cost of the NBN was too high, the case for it had not been made, and the idea of rolling out fibre to every premises failed to recognise the differences in need between certain types of premises.

Also, I wrote this:

“I think there is a cap on how much data we can consume. No doubt data demand is increasing. From 286 MB/month in 2000 to 14,909 MB / month in 2009. But this is a result of moving real-world activities like photos and video onto the internet. YouTube’s audience is double that of the three big channels broadcasting US prime-time TV.

Camera megapixels are a good example of this. For about five years after the advent of digital cameras, the number of megapixels available grew exponentially. But then it plateaued at about 10-12. For the majority of people the marginal benefit of more and more data wasn’t worth it.

Similarly, telephone call sound quality is abysmal and noone cares. Most of the value is in the existence of the link not the quality.”

Well, the data is in, and while I hold fast to my fundamental point about eventual data satiation, that point looks far away. Data demand is nine times what it was five years ago. 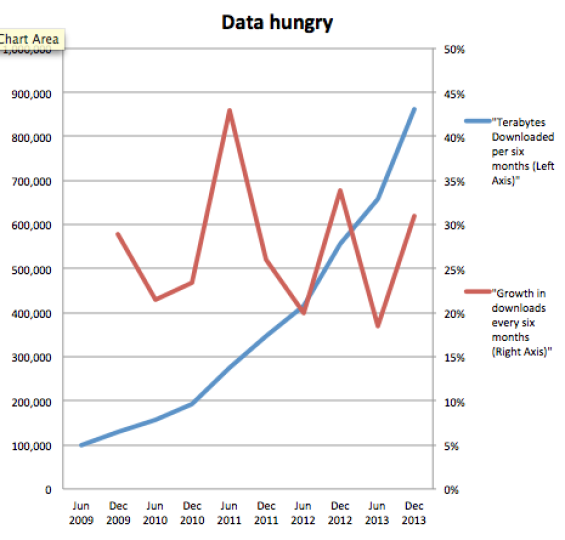 There’s another point to make too. Both this data set and my analysis above are obsessed about downloads. But that’s not the only thing that happens on the internet these days. User-generated content is becoming more important.

It was not until I started making a bit of video that I understood how very very poor upload speeds are. The NBN as imagined originally would offer much better download speeds.

Especially for business, upload speeds can easily be a major choke-point. The shadow minister for communications walloped the government with this point earlier in April.

I still believe that the NBN should be subject to a proper cost-benefit analysis and weighed against other investments. It may be the NBN has an extremely positive return but still yields less than public transport investments. In which case we should probably reconsider our aversion to debt.

But the idea that data demand won’t create need for the NBN, I concede, looks wrong.