America and Australia are going to war against ISIS in the middle east. I feel this represents a failure of thinking. Can we use the same psychology that informs behavioural economics to explain this kind of mistake?

In the face of what looks like a problem, people tend to want to do something it. Our leaders are no different. They have vast policy-making departments that can give them options for action. The military is one of these, and they are able to present a diverse suite of choices with different risks and costs. Once a range of military options is outlined, the problem is framed in such a way that inaction looks like an extreme choice.

Action bias is a common criticism of government, especially from conservatives:

“Regulators are like the rest of us. They are over-confident, thinking they can understand complex behaviour. Hindsight bias leads them to believe events are more predictable than they are. And, unsurprisingly, they are driven by action bias – a tendency to favour interventionist solutions when faced with a problem.” Chris Berg

They are far more quiet about foreign policy than domestic markets for some reason.

Australia and America would surely not go to war if they thought it would be, as has been predicted, an awful failure. Are we more at risk of over-estimating our ability to solve this problem, or under-estimating it?

Clearly the bigger risk is over-estimating.

This war may like most other recent wars, end in failure. But that risk is not easy to perceive by use of human intelligence.

People assume tall people are good leaders, that beautiful people are skilled, that great footballers will make great coaches, or that Einstein’s views on politics are worth listening to.  We suffer from a bias that lets us believe skills spill over from one area to another.

The US military is very strong. We use the word “powerful” to describe it. But that is principally the power to deliver heat and kinetic energy to precise locations in order to destroy things.

Have we asked if that power is what is really needed to stop ISIS?

To my mind, the fundamental problem is not the existence of the organisational structures, but the attitudes that make people want to join it. If you destroy the structures in a way that fan those attitudes, you get stuck in a growing problem.

This is where the “power” of the military is not necessarily a problem solver. For every ISIS member you kill, you might radicalise on average 0.6 friends, 0.4 brothers, 0.4 sons, 0.2 uncles, 0.2 neighbours. It’s possible every enemy killed creates 1.8 enemies (just as a hypothesis).

Every innocent person you kill probably radicalises many more people. And the deaths of innocents are just about guaranteed whether you use airstrikes or boots on the ground.

In summary, sending the military to solve the problem may be like making the best looking employee into an executive. There’s a cognitive bias at work that may mean we’ve made the wrong choice.

ISIS could be quietly building its support base. Instead it has taken a high-visibility approach of televised beheadings. This seems provocative. If ISIS is deliberately drawing the west into war, should that not give us pause to consider where they payoffs of any war are? If its war they are after, why give them what they want?

This is just a quick summary of a few things that may have gone wrong in this decision process. It’s not supposed to be comprehensive, and of course, I’m not a foreign policy expert. If you have thoughts on these issues, I’d be grateful if you would leave a comment below.

The data for overseas arrivals and departures was released today and I decided to see if there was any sign this latest ISIS conflagration was changing Aussies’ travel. 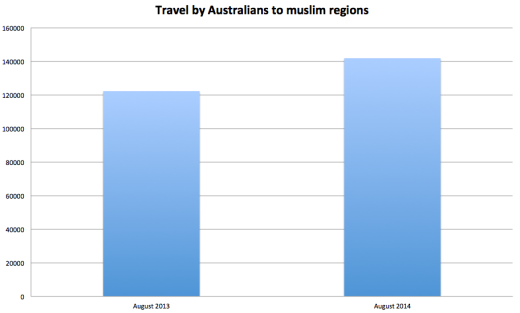 This chart shows the travel by Australians to Indonesia, Malaysia, Egypt, Turkey, Lebanon, UAE, Pakistan and an ABS category called “Other Middle East and North Africa.”

If the government is trying to instil fear, it hasn’t been that effective, apparently. Let’s look at a longer time scale. 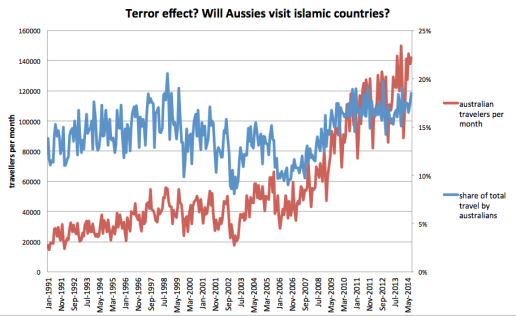 The red line gives us the simple answer. You can’t put the frighteners on us for long. Record numbers of Aussies are out there in majority Muslim countries, from Bali to Karachi.

(It’s worth noting that the number of Australians who identify as Muslim increased from 280,000 in 2001 to 480,000 in 2011. Some of them have family backgrounds in these countries, and might account for a modest share of that increased travel, so it isn’t all exploratory tourism.)

The share of total travel going to that group of countries dips from a peak in 1998 to a low in February 2003. It might be tempting to blame that on the terrorist attacks of September 11, 2001, but half the fall had already happened when those attacks occurred.

The reason for the peak and the pre-2001 fall is prosaic and sensible. IN 1998 opportunistic Aussies were riding a wave of Indonesian exchange rate appreciation that pulled back by 2000. 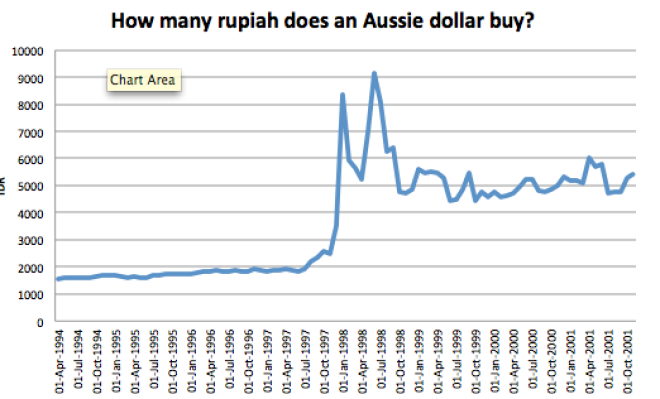 September 11 may explain a short blip but a more powerful explanation for the weakness in the middle of the graph is the 2002 and 2005 Bali Bombings. Both these events had sharp effects on travel to Indonesia. 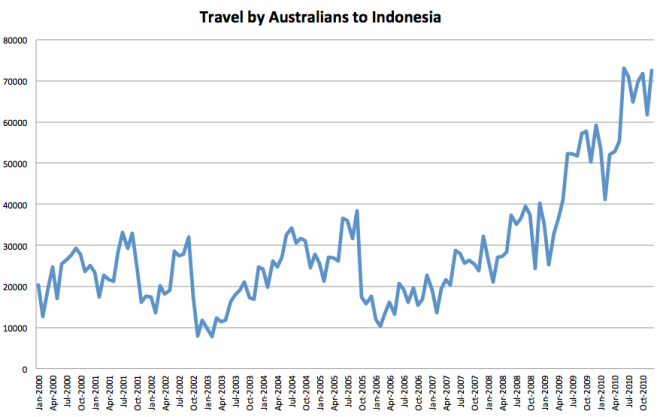 And we’ve been more willing to get off the beaten path of Indonesia and Malaysia. The following graph shows how the shares changed. 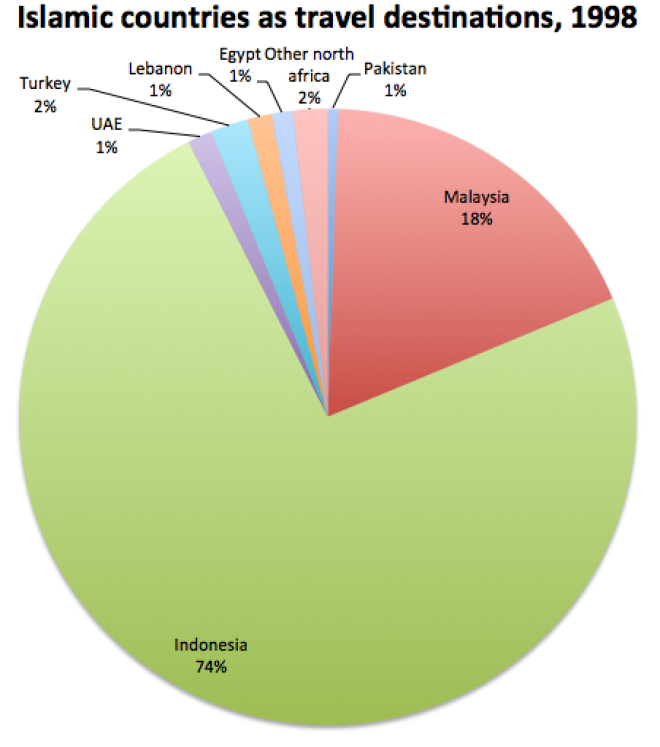 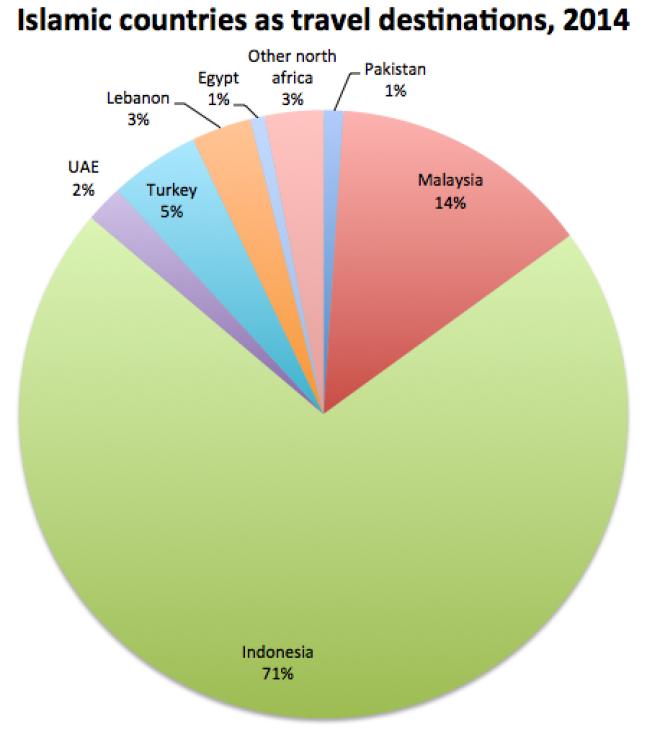 Statistics show Australians aren’t as jerky and petrified as the opinion leaders might think. I’m not surprised.

Let’s hope some of this tourism helps spread a message that even if our government falls into the trap of following the US into war after war, friendship is possible between Australian people and people of Islamic states.