My recent travels through the USA took me to Austin, Texas in the middle of March. At that time Austin is taken over by the festival known as South by Southwest (SXSW). This was no coincidence. We went especially for the music part of this festival and were ready to be blown away.

I wrote in 2013 about my first SXSW experience, and this time was definitely different. The festival had returned to its roots – eschewing big names in favour of exposing new bands. This meant the bills were filled with names we did not know, and gave us more freedom to choose venues at random, without expectations.

The music was often great, and despite never having heard the tracks before, we regularly left gigs with a hook on repeat in our heads.

But there was one surprise. Time and again we found “bands” on stage that were not traditional bands.  Many acts did their show on just a laptop and a microphone. We saw the Apple logo more often than the Fender logo.

That’s fun, but a traditionalist streak lurks within us. So on day four, the desire to actually see a big, proper band letting loose made us seek out an African/Carribean night at a smaller club. It featured acts from Cote d’Ivore, Nigeria, etc, and we expected something in the tradition of Fela Kuti.

But our search did not lead to a big band. Not a cymbal was struck in anger. Once more, we saw multiple acts featuring one microphone and one Macbook.

It sounded great, the crowd was into it and we had a good time. But it got me thinking. In Cote d’Ivoire, how is a band starting out going to buy instruments? In Australia, people who are in bands work hard in traditional jobs to get the money to buy a bass, a guitar, and a drumkit, each of which can cost over $1000.

My friend the trumpet player, for example, is a vet.

It’s common knowledge that a band doesn’t make money in 2015. Not for the first few years, anyway. So they need a revenue stream. With the economic situation in Cote d’Ivoire, it’s probably not as simple as working in a bookshop to save for a new amp or some pedals. It makes sense most acts will be lean, streamlined, cheap to run. Expecting a full band is like expecting a grand piano. Not realistic.

That idea stewed in my mind for a while until I realised that it wasn’t just relevant to impoverished West Africa. It would apply in the rich world too.

Instrument choice could even explain success and longevity. Longevity and success are going to be linked in both directions. Because a good band will last, but a band needs to last to get good.

Who is more likely to get the 10,000 hours of practice they need before they crack?

While all bands suffer from entropy and slowly disappear, the effect will be more pronounced for larger bands with more expensive equipment. There are plenty of reasons for bands to split. But money-making is not the least of them.

If a big band does make a bit of revenue, the musicians will find it divided among many people, and soaked up by depreciation of the band’s material. They will start to see the band as an ongoing expense, not a money maker.

Perhaps in the 1980 and 1990s, bands endured this period with a little more hope of cashing in eventually. But in 2015 the idea of selling records is something of a joke. (Side note: at SXSW, the streets were littered with thousands and thousands of CDs that enterprising bands were trying to give away and punters couldn’t be bothered carrying home.)

In this scenario, bands with an upright bass and a trumpet are disappearing fast, while the number of bands using pirated software and a macbook shrinks at a lower rate. That means by year four or five, when all the skills are finally in place to write a song that’s genuinely awesome, the bigger, more traditional band’s songwriters are back at university, while the smaller acts are still plugging away.

It may be hard to justify a full band when you can make all those sounds through a computer. The main advantage of a proper band could be the richer stream of ideas that come with a meeting of minds.

Happily, there is still evidence of that happening.

Quality still wins out and the occasional seven-piece does make it through the cracks to become a viable band. Below is the Mowgli’s, who sounded great. Sure they’re white people from LA – one of the richest cities in the world – but at least that swirling moneypool is splashing some cash in the direction of old-fashioned music making. 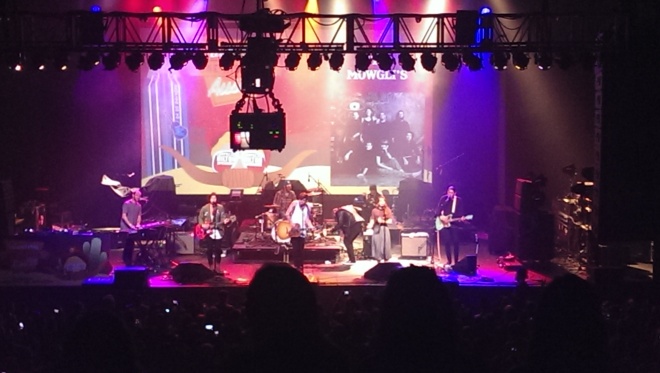