Australia’s budget is in a spot of trouble. The ABS released its latest Government finance statistics this week and they show a slump in revenue.

This, to me, is not a crisis. It’s not good news, but just as you don’t judge a game of football on a 2 minute period, you don’t judge a fiscal situation on a quarter (or even a year, or even a group of years). You ned to judge the fiscal position in the long run.

I’m interested in this high-level measure, the tax-to-gdp ratio. And that’s an interesting thing, with a few moving parts. 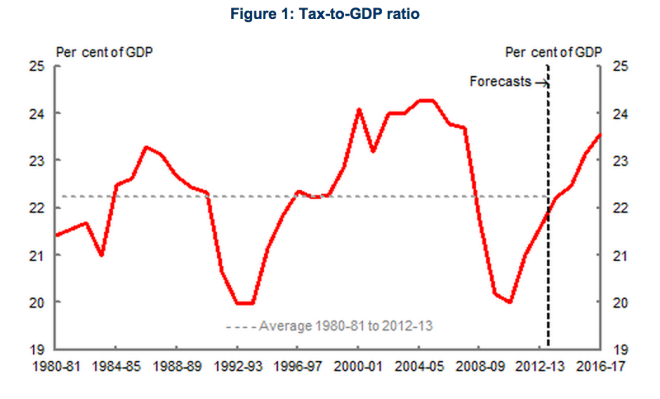 Treasury has relatively recently begun spruiking it. (This began in the Rudd era, I believe, when he wanted to seem fiscally prudent while spending a lot.) It can be affected by deliberate actions of government, or by shifts in GDP and prices of key exports.

That spike in the red line at the end is now at risk, due to factors beyond the government’s control. In the 2014 Budget, the government announced it would increase revenue as a percentage of GDP, from 23 per cent to 24.9 per cent.

Given the way everything economic and budgetary has come up turds since, the MYEFO is likely to replace this optimistic assumption when it comes out (soon).

So we’re likely to get a budget deficit that is expanding and a tax to GDP ratio that is falling.

So what should the government do? In the short-run, it should keep spending to prop up growth. But in the medium to long run it needs to do more.

The most senior figure in Australian economics, Max Corden, strips the issues back to their essentials in the Conversation today.

Cutting spending is important where programs are ineffective, or where you’re trimming fat. That is crucial. But it won’t be enough. The Australian people want the government to do more, not less – we want important things like the NDIS and funding childcare and kindergarten.

I’d support raising taxes, slowly and in a clever way, to try to right the structural budget deficit.

This might seem like an impossible PR job for the government. But with the help of one man, it may not be. The name John Howard is like a magic charm in contemporary politics.  A man who wins four elections  (96, 99, 2001, 2004) gets a lot of kudos in retrospect, even if he had a seriously easy incumbency, bountiful in threats to national security and bumps to government revenue.

Mr Howard presided over an era that saw the tax-to-GDP ratio rise over 24 per cent, even as he gave away income tax cuts as fast as he could. People remember that time fondly. The song that pleaded for us to not take a rose coloured glasses view of his legacy? That record broke.

The man is viewed (wrongly) as a fiscal genius.If I were Joe Hockey, and I was facing up to the fact I needed to to try to sell tax hikes, I’d stick his name on it.

3 thoughts on “The man to sell tax hikes to the Australian people … is John Howard.”