In 2004, I attended my last exam at the University of Melbourne – 316-303 Industrial Economics. As the “pens down” call went out, quiet fell. The ratcheting sound of my HECS debt accruing was finally gone.

I went on to add a bunch of credit card debt that final summer of freedom, flitting around the northern hemisphere in the knowledge that I had a job waiting for me in Canberra when I came back.

But while that $6000 of credit card debt was paid off within six months of working full time, the $32,000 took 10 years of nibbling to finally destroy.

HECS is a system that allows you to buy education now and pay later. You rack up debt on every subject you study (arts costs less, medicine more). Then you only have to pay it back once your earnings go over a certain level, currently $51,309.

HECS was invented by a kindly gentleman called Bruce. I’ve met him and he seems like a good egg.

The idea is for people who get a big benefit out of their tertiary education to put some money back into the system to help keep it afloat. The genius of HECS is that it – in theory – shouldn’t deter people who come from less wealthy backgrounds, or have lower expectations of their lifetime earnings. If they never earn above the threshold, they never pay it back.

My HECS debt shrank steadily for several years, then picked up again in 2008 when I left the federal government to sample a life of leisure, etc. The knowledge that the HECS debt you worked hard to eliminate is creeping back up does tend to haunt those otherwise blissful idle hours. Perhaps that’s the point. But the good news is it only ever goes up at the rate of inflation.

So long as wage growth outstrips inflation, your HECS debt is getting smaller in practical terms. 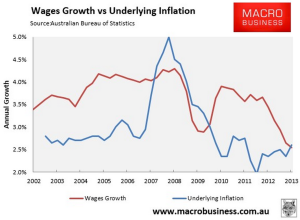 There were always deals available where you could trade cash now to eliminate your HECS debt with a small bonus. But I never took them, preferring current liquidity and betting that my future wages would make my HECS debt seem small. (After choosing to work in media, I never really reached that point.)

By the end, the impact of HECS on my paycheque was quite annoying. I would much have preferred the few hundred extra in my hand every time. But then, while I wasn’t paying attention, it was gone. Hallelujah!

The lessons of HECS are this:

One thought on “My HECS debt is finally gone!”