What is harder – making money or saving money? Judging by the amount of time my facebook friends seem to spend relaxing in exotic locations, the latter is substantially more tricky.

How much could a person save, if they wanted to live a normal life in a decent part of the city, showing up for work dressed appropriately, heating their house, eating nourishing food?

Let’s assume a budget of $180 a week for rent, which gets you a flat near trams and trains, 10km from the city. Assume a full-fare yearly Myki for $1430 and a diet short on smoked salmon. 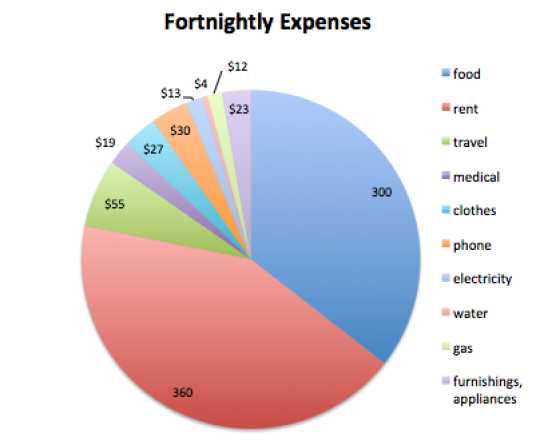 Before I made this graph, if you told me it was mathematically possible to save $20,000 a year on a pre-tax income of $50,000 I would have called you crazy. The graph above does not account for any government transfers or the low income tax offset (worth $230/year at income of $50k), either.

Savings advice seems to always centre around giving up takeaway coffee (1, 2, 3). I don’t drink a huge amount of take-away coffee, but when I do, I really enjoy it. And really, five cups a week at $4 each is only $20 a week.

The pie chart above shows there’s more to be gained by trimming down the big recurring expenses. Finding a place that rents out for $20 a week less locks in the saving of $20 a week, without constantly exercising self-control over caffeine urges. Self-control is like a muscle – it tires as you use it. So if you avoid buying coffee in the morning, you are more likely to splurge on pizza on the way home. Any saving plan should rely on locking in low recurrent expenses.

Behavioural economics suggests that humans have “present biases” that prevent them from meeting their own stated preferences about saving. That’s why we have compulsory superannuation. But there are tricks that make people respect their own preferences.

“Soman & Cheema (2011) evaluate an interesting variant of a commitment savings technology in a field experiment targeted at unbanked construction laborers in rural India who are paid cash wages. Individuals earmarked a certain amount of their weekly wages as savings that was then set aside in either one (nonpartitioned) or two (partitioned) sealed envelopes. Realized savings was 39–216% higher for workers whose savings were partitioned into two envelopes rather than put all into one envelope. The authors hypothesize that opening a savings envelope, or violating the partition, induces guilt. Having multiple accounts, or partitions, increases the psychological cost of spending money set aside for a specific purpose and consequently increased the amount saved.”

Even if they could, most people would not live like monks just to save up pennies in their bank account. But the structure of our tax system mean they will do it to pay for a home.

I hesitated to even publish this graph, because it makes my non-house purchasing ways seem immoderate and wasteful. But there it is, in all its horrible glory. You can – if you set your mind to it -base a life of grim abstinence in a house of grand proportions.

Saving a bit is important to make you happy.

The kind of lifestyle I graphed above would be easy to maintain for a fortnight, possible to maintain for six months and hard to do for two years. After five years it’d be hard to do anything else, because your social life would have withered and died. Dickens, remember, also wrote about Ebenezer Scrooge. Like all things, saving is best in moderation.

8 thoughts on “How frugal can you be? And is it worth it?”