The great saviour of the Australian economy arrives in a Porsche 911 convertible. The saviour’s professionally dyed locks are artfully disarrayed in order to best conceal an advancing bald zone. He whips his Raybans from his tired eyes and advances up the pavement to meet you, hand out-stretched.

The great hope of the Australian economy is the advertising man. 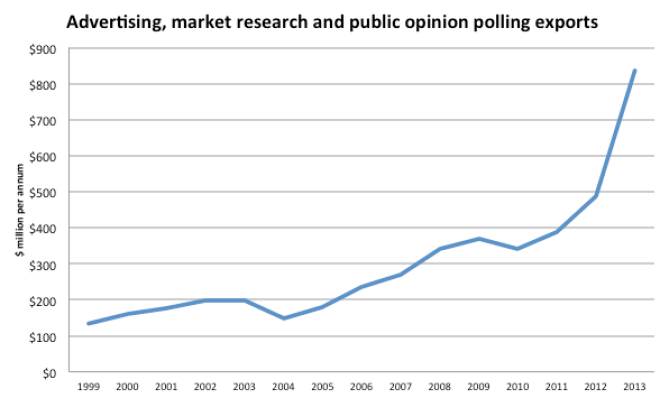 New data on services exports have revealed a whopping great leap in the export of salesmanship. No surprises really. As markets to our north develop there is more need for first world advertising expertise.  And as the world’s developed markets become culturally more similar, Australian ads can play offshore.

Mumbrella has a list of a few Aussie ad exports, including this cat food sushi train ad, which we are apparently sending to Japan!

Regular readers of this blog will know that I am a giant fan of the services economy. I believe that in the future, politicians will idolise services as they now idolise “making things,” because the services sector will have provided the vast bulk of great jobs of their parents generation.

Almost any high-value service can now be provided across national borders.

I was talking to a consultant the other day who’d just signed a whole lot of what he hoped were visa forms for his staff – they were completely in Arabic. His medium-sized Melbourne business was sending people off to the middle east to work on a big project.

Great services export growth is happening not just in travel, but across the economy.