I learned something surprising about Google this week.

I’ve known for some time that if you fill in this form (to post a comment on a blog, or whatever), you need only type the number on the right – it will ignore the number in the photograph. That was perplexing.

Then I discovered Google is using us. When you type the number in the photo, that gets sent to Google Maps, where it answers a question being asked by Streetview – ‘what street number is this?’.

This is quite brilliant. They apparently also use this program, called ReCAPTCHA, to decipher words the software can’t untangle when scanning books. So every time you post on a blog, you’re contributing to the quality of streetview, or scanned books. 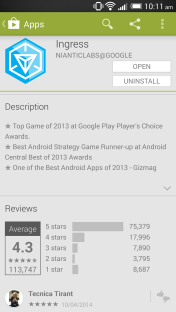 The idea is so clever that Google now has software that is entirely designed to trick us into doing work for them.

I am talking about the “game” called Ingress. I downloaded this last week, because it was free and the Google App store told me it was highly regarded.

I opened the app and when it told me I had to “walk” to achieve the missions, I started pinching the screen, tapping, even shaking my mobile device to figure out how to “walk.” Soon it dawned on me. “Walk” meant “walk”.

The app is designed to collect data on the walking distances, way-finding and walking time between landmarks, especially those which are in pedestrian areas not covered by the Google streetview system. (The game itself is pretty intriguing but also pretty confusing.)

The lesson of all this is the power of a big company – there are amazing things you can do inside a company that you couldn’t do outside.

One of the last century’s most famous economists – Herbert Simon (Nobel Prize in Economics 1978) argued the existence of companies actually showed markets’ weaknesses. (Here’s his great 1991 paper, Organisations and Markets.)

Inside companies, exchanges are based on relationships, not market payments. Unless you get paid piece-work, you are rewarded for being there, not for every article you write, or every ministerial briefing, or every line of code. You do the work because they trust you to do it. You are getting paid, sure, but you trust that working hard now will lead to reward down the line. It’s not specified in the contract.

Every time a company expands, they are saying that they have more faith in using relationships to get the output of the people they just hired, than using the market. The reason is transaction costs.

Google is a monstrous, monstrous beast. It now has 47,756 employees, and if they are as happy as my friend who works there, they are very happy indeed.

While Google is tricking us into doing work for it via non-market transactions, Amazon is arranging to pay people to do similar work.

They have a “marketplace” called Mechanical Turk, where you can get stuck into the task of diong things computers can’t. Maybe selecting which photo of a landmark is clearest and best, transcribing some audio, or similar.

But it has been controversial. Bloggers complain the pay is too low and the jobs listed are themselves spam, the term digital sweatshop is being thrown about, and the Huffington Post has written about “Amazon’s new underclass.”

But there are many tasks, like completing surveys or any crowd-sourcing task, where low effort from lots of people delivers a better result than lots of effort from a few well-paid people.  Google seems to have this figured out – the market is not always the best solution.

5 thoughts on “A surprising thing about Google, and the economics lesson it teaches us.”