Imagine all the laws in Australia. Some are obviously very good, like the prohibition on killing other people. Others are defintitely pretty good, like the law against stealing – you may be able to think of some exceptions to the law, but it’s sound. Then there are laws that are distinctly marginal.

There’s lots of little rules like this. They are marginal rules that have counter-arguments as strong or stronger than the arguments for them, but they stay the way they are. Like lowering the voting age or changing the retirement age. 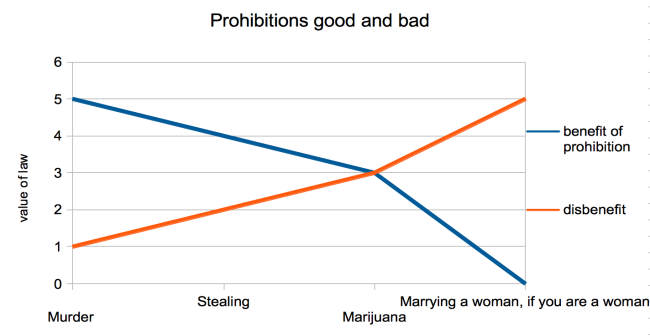 You have a lot of policy settings that are stuck the way they are because of what we may term path dependency. Once you make a decision, you are stuck with it. Path dependency is like the slippery slope argument, but inverted – a sticky slope?

But the graph above is not set in stone and path dependency is not forever. It remains definitive only so long as other elements of the environment are the same.

In the United States, a pervasive marijuana culture led to the availability of medical marijuana, and now two states have made sale of recreational marijuana totally legal. Check out this shop in Colorado, the 3D Marijuana dispensary.

Prices are sky-high, and so is demand. It is remniscent of the Netflix argument. People will pay a premium to access something free.

It’s not just Colorado. Some other very influential states have legalised marijuana. Not just Washington State, which will follow Cololrado in allowing retail stores in 2014, but since 1996 also California, where medical marijuana is freely available (certain doctors hand out prescriptions willy-nilly).

New York is also moving to be in line with 19 other US states and make medical marijuana legal.

This is relevant to Australia. We are not about to take the lead of Portugal, where decriminalised drug possesson is hailed as a success. That is practically not even a developed country! But New York, that’s different. That’s the sort of precedent that will make a difference in the Australian debate.

In fact, the Help End Marijuana Prohibition party has already used the American precedent to help get an article published in that pinko rag, The Australian.

Do not forget Professor David Pennington called for the regulated supply of marijuana as long ago as 1996, in a report written for the Liberal government of Victoria. This is not a fringe policy position.

Legally, the status of marijuana is a state issue. Legal supply (whether medical or a free-for-all) could happen in the ACT or the South Australia, where the drug is decriminalised. Once one state does it, the cost for the rest of maintaining prohibition becomes much higher and they will have to question the benefit.

One thought on “Legal Marijuana is coming to you”