Ask someone the highlight of their school education.

“I remember my grade 9 English teacher. She really believed in me.”

This is the sort of memory that has inspired a whole genre of films. From To Sir with Love (1967) to Dead Poet’s society (1989) and Freedom Writers (2007), the one good teacher that can change your life is a truism of modern culture. It’s part of the sales pitch for programs like Teach for America and its local knock-off Teach for Australia.

Now a bunch of economists have done the work to measure the influence one good teacher can have.

They had a sample of one million students and found that the ones randomly assigned to high quality teachers were “more likely to attend college, earn higher salaries, live in higher SES neighborhoods, and have higher savings rates” [link to paper]

These graphs tell the story better than words: 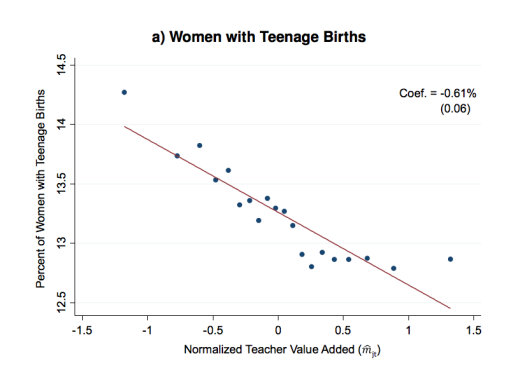 There is a catch. The quality of teachers as measured above is in their ability to contribute to results in standardised tests. (they use the term value-added)

That’s not the sort of thing you can make an Oscar™-winning Picture about…”Starring Sean Penn as Mr Brown, who drills his students on multiple choice questions every day in lieu of teaching life lessons.”

I tend to disagree with the merits of using narrow standardised tests to rank teachers.

The saying “if you can’t measure it, you can’t manage it,” has a flipside. People obsess over the things they can put metrics on. You can’t measure the subjective benefits of a good teacher. Nobody denies the importance of all the non-academic work teachers do, but it can’t be measured so it is not addressed.

Nevertheless there is an important point to make here. Teachers are important. Far more so than society gives them credit for. And teaching is not rocket science, it is harder.