The total number of people employed in Information, Media and Telecommunications is the lowest since 1999, according to new official data from the ABS. In the last three months, under 200,000 people were employed in the sector, down 23 per cent from the peak over over 250,000 in 2006.

That got me interested. I recently left a job with a major media organisation, at the same time as some heavy hitters (1, 2). How bad was it getting?

The answer: REAL BAD. In the publishing game (books, newspapers) employment fell during 2013 to the lowest since records began in 1984.

[All data from the Detailed Quarterly Labour Force series, Nov 2013].

Publishing is not the whole story.

Employment in traditional broadcasting has also seen very little growth. There were more people employed in the sector in one ebullient quarter of 1994 than during the most recent three months. (In 1994, SBS was finally available in all capital cities, but it broadcast the test patten for hours every day.) 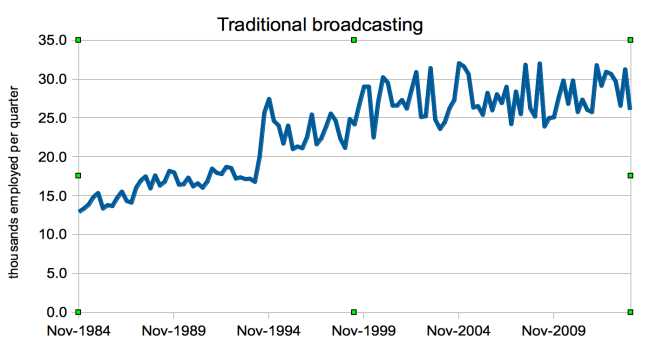 That all makes sense.

Online, the classic economic distinction between work and leisure is shaky. People work on the internet for free.

The proponent of the idea is a man called Clay Shirky, and I have written about him here. He claims people would happily give up TV watching for something a bit more active and participatory, and so free content is booming. Content is not just blog posts like the one you are reading, but Youtube videos, Wikipedia, Reddit, Open source software and more and more #doge memes.

So far so good.

But thanks to the mysterious ways in which ANZSIC standards move, folk who work in communications are included in the information and media statistics. This shocked me more. The way this little sub-sector has collapsed puts the newspaper game to shame.

This next graph may look less dramatic but the numbers of people involved are far greater. The communications sector is now employing fewer people than it has for ten years.

See that steep ramp-up in 1999? That was the year I started university.

I had long hair, I was 17 and I weighed about 60 kilos. I was getting paid $8.50 an hour in my part time job bussing tables at a very busy Cafe in the local shopping centre. I was studying economics and politics – which I loved – but I had a nagging feelings of doubt.

All the headlines were pointing to IT being the great gold rush.  In 1999 the Nasdaq index rose from 2200 to 3700. Another undergrad friend of mine became an executive in an online company that was apparently booming. I felt like I had missed the plane.

Boy, am I glad I studied economics and politics.

3 thoughts on “Media and IT are the future, they said.”