1. Is the biggest story of the election the end of the National party…? If the Labor party is governing for the regions, what’s the niche for the Nationals?

And if the Nationals are a chance of losing some of the seven seats they hold, what is the future for the coalition? Will Liberals pick up seats Nationals lose next time round? Will they merge, and if they do, as has happened in Queensland, will they be as able to angle for the country votes? Or can Labor swoop? Or will country voters see the value in supporting a local independent?

They have the prime ministership, but is that the same as government? If they can’t move their own legislative agenda without compromising with everyone, are they any more powerful than anyone else? 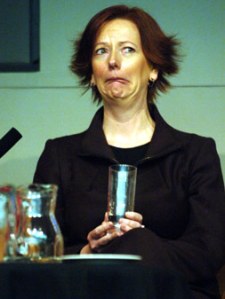 What does it mean to be in government?? Without a lower house majority, is it just a nominal title??

What’s the point of chairing a Cabinet with no capacity to implement its decisions? How is the executive of this “government” any different from the opposition caucus? What’s the role of the leader of a parliamentary party without a majority? it’s not so different from Tony abbott’s job, or bob brown’s job.

I expect this will be the most-discussed election of our life times.

5 thoughts on “Thoughts from the election”