I’ve written before about the Barcelona meets Bentleigh East plan.

Developed by Rob Adams, it maxes urban density without screwing up the city. Ninety-one percent of the city stays exactly the same, full of stand-alone suburban blocks. But the tram and bus lines are (mostly) free to be developed (heritage overlay areas would be protected).  The density is achieved without creating massive overshadowing towers and without wholesale sacrifice of the urban scape we know and (some of us) love. 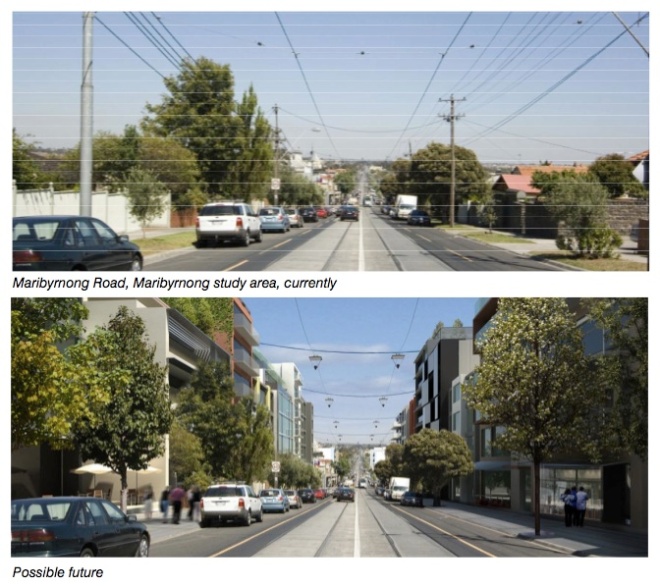 However, now Rob’s plan is under attack by a couple of white-hot young philosophers whose radically incisive views the Fairfax press has seen fit to amplify…

Peter Fisher and Len Puglisi have written a scathing indictment of apartment living that is occupying untold square metres on broadsheet opinion pages and LCD screens around the nation.

Their lead-out, knock-em-dead point?  Apartments can cause flooding.  Yep.  If there are buildings right up to the road, the water has no front yards to soak in to.

I pondered this porous analysis, and perused the article to see whether it proceeded past parody.  Perhaps they’d penned some persuasive points on population policy?

Nope. After being unable to untangle the following incoherent stanza:

Previous efforts to achieve medium-density developments by governments since the 1980s saw strong pressure by big developers to ignore their good intentions. It might be hoped that controlling this market outcome can be achieved by prescriptive zoning conditions – putting downward pressure on land prices and keeping smaller builders in the game.

I lit upon their key point:

Is packing up to 1½ million into apartments a formula for “a sustainable future”, with the inhabitants losing further contact with the stuff of the natural world – perhaps missing out on the tangible health benefits of pet ownership or those of local food production?

(Although, it’s not actually true.  People in apartments all over the world have dogs and cats, window-boxes and communal gardens.  But if it was true, it would be an outrage!)

But I want to give credit where it’s due: Fisher (a planning /climate change academic) and Puglisi (a consultant with a government background) do engage a substantive issue here, briefly, calling for ‘planners and governments to turn their ingenuity to ways of limiting [population] growth.‘ That is indeed a relevant issue. It’s a shame certain ‘planners’ are so obsessed with drainage. I suggest they put the key in the ignition of their stalled ingenuity-mobile and start turning it around.

Just for laughs i want to share with you their concluding sentence:

These are sobering thoughts indeed for a nation that treats the land as some incidental substrate for unfettered human and economic domination.

ROFLMAO. I’d give a grade 12 a B+ for rhetoric like that.

If these were sober thoughts (it reads as though they were produced after the consumption of several ounces of locally-grown) they might be sobering. As it is they’re an incidental substrate to my cat’s unfettered domination of the litter tray.

5 thoughts on “A deluge of density”