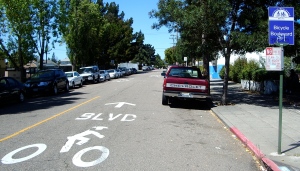 Rather than cram bicycle lanes onto main thoroughfares and roads that are a little too narrow, the Berkeley Council has taken another approach.

They have created a series of ‘bicycle boulevards’. Every seventh or eighth street on the grid (oriented north/south and east/west) has been turned over to cyclists. The road have effectively been turned into big wide bike paths. Naturally cars are still able to use the roads, but every so often a row of bollards are positioned diagonally across an intersection to direct the car traffic onto the parallel roads. 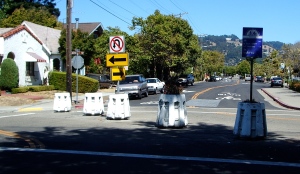 Having rolled around this town for a few months now I think it works quite well. Cyclist have access to safe and fast routes throughout the area and most bicycle traffic is kept off the major roads. Unfortunately this is not always the case. 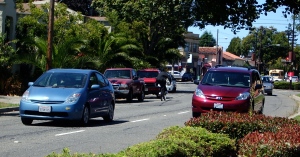 One thought on “Berkeley – A good place to cycle”