I’ve been three times in the last four years. And I’m not alone. 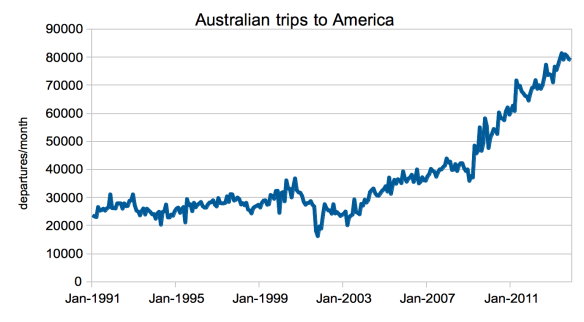 Part of the attraction is flights that are suddenly very very cheap. When the Qantas/United duopoly on the Sydney-LA route was broken in 2008, the price of flights halved.

When V Australia entered the market in 2008, their killer price offering was $1899, 16 percent below the existing lowest price. I’ve since seen return flights below $1000.

You can still buy a flight Sydney-LA for just a little over $1300 if you are bold and foolish enough to trust your travel to United. [My last trip to the States involved an unscheduled night in Sydney when someone crashed a luggage cart into our United Jet. Their initial compensation offer was accommodation in Woolongong and a flight 3 days later…]

At $1300, the appeal of a trip to the US is strong. The politics may be stuffed, but much like China, that doesn’t ruin it as a place to visit. I have been there more than any other country, without feeling like I’m running out of towns or states I want to go to.

But, sadly, the best time to visit America is now past. The weird period in global financial markets is over, and US quantitative easing is heading (slowly) for the exit. Our dollar might be lucky enough to get back over US90c, but the word parity can now safely be taken by currency writers and put in the top cupboard, along with “gold standard” and “the great moderation“.

The effect of the falling Aussie dollar is already showing up in the ABS inflation statistics. There is likely to be a lag too, so that might not be the end of it.

So what are our alternatives?

New Zealand is also going to feel more expensive than it has in years.

Europe is just as bad.

But luckily, the second-top holiday destination for Australians has  a currency that’s even less popular than ours. In November 2013, Indonesia pipped the US as our second-top travel destination. I predict that by November 2014, there will be daylight between them.

Or, I suppose, if things got desperate, you could always take a holiday in the place where the exchange rate is always 1:1.

I hear it can be quite nice.