This post originally appeared over at The New Daily, where I’ve been writing a consumer-focused story each week.

We’ve all been there. In a bottle shop on the way to a dinner, wondering what kind of wine to buy.

20 per cent of our brain is thinking about the grape varietal, but 80 per cent is wondering if we’ll look like a bogan if we bring something cheap.

Australia has been doing wine wrong for ages. Our approach to vino is getting further and further away from how the Europeans do it, and more and more silly in the process.

The price of grapes has been tumbling. 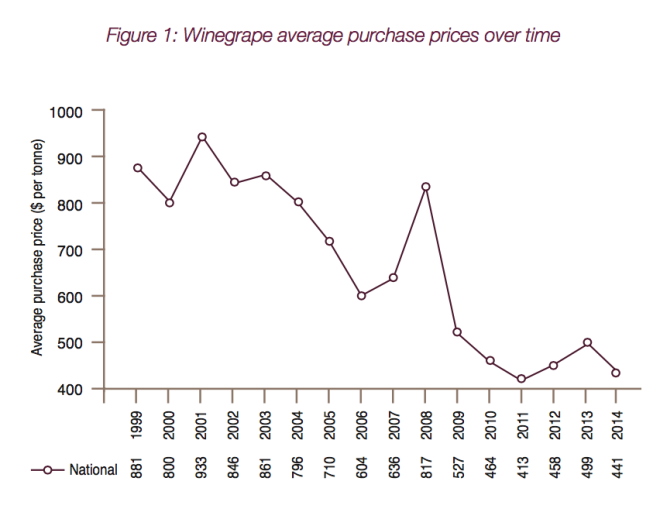 Just 15 per cent of grape growers made a profit last year.

But has that meant cheaper plonk for us? Hell no. The average price paid for wine has now risen over $10/litre.

As the cost of grapes falls, we buy more and more pricey wine.

Wines that sell for over $15 and over $30 have seen sales grow by about 50 per cent in five years.

(The under $7 category looks big, but remember that will include sales of those commercial-size 30+ litre casks to pubs, restaurants and commercial kitchens, – what you’re left with is a market for bottled wine that has turned quite fancy.)

It may be hard to believe but a $35 bottle of wine may be no better than something that costs 10% as much. Here’s why:

Those scientists found real differences inside people’s brains during tasting, just depending on the price point they were told about. (It was the same wine.)

They really experience a difference. But here’s the thing. If you know there’s no difference between the expensive wine and the cheap wine, the trick doesn’t work.

So buying cheap wine and being confident it will taste good should be a winning strategy.

It’s not easy to do that in Australia. Part of the reason is the grip the big supermarkets have on the wine market.

According to a report published by the Winemakers Federation of Australia, Supermarket chains account for 56 per cent of wine sold. Independent bottle shops for 14 per cent. Cellar door online and wine clubs are 11 per cent. And food service accounts for 19 per cent.

When you stroll the aisles at Dan Murphy’s, your eye might settle on a bottle like Silver Moki, a Marlborough Sauvignon Blanc.

The answer is there is no such winery and the brand on the bottle is owned by Pinaccle Liquor, which is associated very closely with Woolworths. Pinaccle Liquor essentially makes home brand drinks for Woolworths. Not just wines but also spirits. It also has the license for certain imported brands.

Dan Murphy’s is also owned by Woolworths. But on the shelves at the bottle shop, unlike at the supermarket, these Woolworths brands don’t have the word Select on them.

Owning their own brands gives Dan Murphy’s market power. It can fill its shelves without having to give in to every demand that comes from every vineyard.

Dan Murphy’s success contributed to the 27 per cent gross profit at Woolworths (translating to $2.5 billion of net profit after tax) in the 2014 Financial year.

The company-owned wines are apparently something they don’t like to talk about much. Woolworths wouldn’t send me a list when I asked. But a huge range of company-owned brands (Coles as well as Woolies) is outlined at the independent website whomakesmywine.com.au.

These company-owned wines are not necessarily bad. Some have local wine-makers involved in their production and have great marketing, like this Yarnbomb wine. It’s made in the Pinnacle Drinks production facility, from grapes sourced from across Maclaren Vale.

But some home brand wines are just mass-produced, like a bottle of Sprite. Pinnacle Drinks also makes the Spanish Tempranillo ‘Lovers not Toreadors’ for Woolworths ($16.99 a bottle), and C’est La Vie Rose ($13.99 a bottle).

We love the stories of independent winemakers. We love to visit cellar doors and see a few generations of one family at work among the intoxicating smell of the barrels. But we refuse to admit most wine is not made like that.

We are paying a premium for home-brand wines, and kidding ourselves.

Because our nation is relatively new to wine, wine is a source of fear as well as delight.

In Europe, families might take a plastic bottle to the supermarket to fill up with a litre of table wine for a euro or two.

Meanwhile we worry about being seen drinking the wrong kind and worry that we are insufficiently expert. We do wine appreciation courses and we spend up big to compensate.

We weren’t always so fussy about wine. It used to be acceptable to get wine in a box. But around about eight years ago the cask became a minority item.

But maybe it’s time for the comeback of the cask. If we’re going to be drinking wine that’s made much like Sprite, why kid ourselves that it’s fancy?

2 thoughts on “How you’ve been buying wine wrong.”